Both have been ill on South African tour, and head into series opener on St Stephen’s Day having sat out five days of warm-up cricket 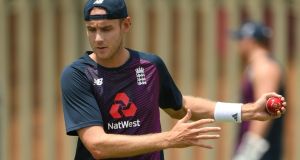 England will ask Stuart Broad and Jofra Archer to make an “honesty call” about their fitness for a St Stephen’s Day Test, with Broad’s vast experience making him a likelier option to take the field against South Africa.

Both men have been struck down by illness on the first week on tour, and head into the series opener having sat out all five days of warm-up cricket, which concluded three hours ahead of time on Sunday with early handshakes in a low-key draw against South Africa A.

Spinner Jack Leach is similarly undercooked but he looks set to miss out anyway, with England seemingly ready to rely on the part-time spin of captain Joe Root and Joe Denly. The question of what to do with Broad and Archer is considerably thornier, with both men first-choice selections at full power.

Broad is understood to have progressed best over the past couple of days, during which all three players have made gentle returns to the nets, and took part in the longest practice session on Sunday. With 134 caps and a dozen years of Test cricket to his name, he knows as well as anyone what he can put his body through if required.

The case for Archer is less clear. England would dearly love to use his express pace and star quality at Supersport Park but he has been hit hard by the bug and, with just six Test and 35 first-class matches under his belt, may be less certain about what he can put himself through.

Root made it clear that the deliberations ahead will be challenging and will rely on the players’ own account of their readiness.

“It’s a tricky one. They will do everything they can to be ready and that’s all you can ask,” he said. “When it comes to it we’ll have to make some very shrewd decisions. We shouldn’t take anything off the table and just evaluate things sensibly when we’re in a position to.

“You want to make sure they can really let themselves go and get through 20 overs in a day, 25 if they absolutely had to. It’s a fine art, but there’s trust on either side that has to be taken into account. It’s a case of making an honesty call. I’m sure the guys will make the right decision.

Root admitted Broad may be in a better position to assess what he is and is not capable of, having managed the rigours of five-day cricket for most of his playing career.

“He’s certainly got more experience. He’s probably got through games before if he’s had a niggle and managed his body by being quite savvy,” said the captain. “It’s very rare that guys actually go into a game carrying an illness. If he feels he can get through five days as close to 100 per cent as possible, he’ll tell us.”

The third and final day of England’s game against South Africa A ended in faintly comical fashion as the teams agreed to call time at just 2pm. It transpired that an existing understanding that the match would be called as a draw during the tea interval was brought forward because the hosts did not have a new batsman padded up at the fall of a wicket.

Keegan Petersen was last man out for 111 in a score of 325 for five – not the first man with the initials KP to score 100 in an England match, nor the first to cause them considerable frustration.

James Anderson was again the pick of the attack, finishing with three for 41 in 19 overs as he prepares to return to the Test arena after five months out.