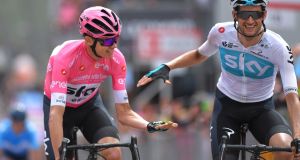 Chris Froome and his Team Sky team-mate Wout Poels during stage 20 of the Giro d’Italia from Susa to Cervinia on Saturday. Photograph: Justin Setterfield/Getty Images

Chris Froome is set to complete a remarkable victory in the Giro d’Italia after retaining the leader’s pink jersey at the end of stage 20.

Froome, who held off reigning champion Tom Dumoulin, will become the first British rider to take the honours at the Giro and join Eddy Merckx and Bernard Hinault as the only other men to hold the three Grand Tour titles simultaneously.

Froome appeared to be barely in contention a matter of days ago, but moved into the lead on Friday, when he made an audacious solo charge from 80km out on the mountainous stage from Venaria Reale to Bardonecchia.

It was a monumental effort which propelled the 33-year-old from three minutes and 22 seconds off the lead to the front runner by 40 seconds.

By the time he crossed the line ahead of Dumoulin, who attempted to attack Froome on several occasions but seemed to accept he had come up short in the final phase, victory was all but assured.

Spaniard Mikel Nieve was the stage winner on his birthday, but as the race heads to Rome for its procession, it is Froome’s mastery of the general classification that dominates.

Froome cut a composed figure as he accepted congratulations at the finish line and suggested he had never felt threatened by Dumoulin’s efforts to force the pace.

“I thought there were attacks I had to follow in the final, but I felt very much in control and capable of following today,” he told Eurosport 1.

“Everyone had such a hard day yesterday no-one really had the legs to go anywhere. It was for us to follow and me to keep an eye on Tom.”

Reflecting on the exacting nature of a course which has taken many high-profile contenders to the limits, Froome added: “This Giro has been brutal, absolutely brutal.