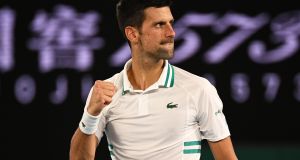 Even after a dramatic week like the last, filled to the brim with injury, frustration and doubt, the outcome for Novak Djokovic so rarely ever changes. With a wonderful performance, Djokovic ended the surprise run of qualifier Aslan Karatsev with a brisk 6-3, 6-4, 6-2 win to reach the Australian Open final once more.

Djokovic has now reached nine finals at the slam he has dominated for over a decade. It is ominous enough that he has a perfect 8-0 record in those championship matches, but even more notably, he ended his time on Rod Laver Arena with a statement to be heeded. “This is [THE]best I felt in the entire tournament,” he said. “Felt great, I can swing through the ball. No pain. Just the best match so far. It came at the right time and I’m thrilled to feel this way, for sure.”

After a win over Alexander Zverev that was more impressive for his clutch play than his consistency, Djokovic finally played with a level of physical comfort, following the abdominal injury he sustained in the third round against Taylor Fritz, that allowed him to soar. For the first time since the first week, he did not clutch his stomach or grimace between points, and the bilingual monologues to his camp were replaced by a searing focus.

On the other side of the court, Karatsev stood as one of the most fascinating stories of the past year. Before the tour hiatus last March due to the coronavirus outbreak, he was the definition of a journeyman. Ranked 263rd then, he had spent just one year of his nomadic life in the top 200. His pursuit of a meaningful career has taken him to different training basess, from his Russian hometown of Vladikavkaz to Israel, back to various parts of Russia, Germany, Spain, and now Belarus.

When he returned after the break last year, he immediately began a startling run across the European clay court challenger events, winning 20 of 21 matches and rising to his current ranking of 114. A modest grand slam run, particularly on the clay courts of Roland Garros, looked a possibility but his presence in the final four here is unprecedented. No male player in the open era had ever reached a slam semi-final on his debut; he has done so at the age of 27, after already spending so much of his life elsewhere.

As Karatsev stood before one of the all-time greats in his second home, he immediately looked like he was exactly at the level he should be. His vicious ball striking from both wings, driven by the force of his enormous calves, immediately penetrated Djokovic’s defence not only because of his sheer power but his rare ability to drag opponents off the court with his wicked angles. And yet Djokovic still roared to a 6-3, 5-1 lead, the type of outlandish feat that really only he can achieve.

The world No 1 landed his returns at Karatsev’s feet, redirected so many of the Russian’s strongest blows and unflinchingly stepped into the court whenever the opportunity arose, hitting just one unforced error in the first 77 points of the match. He offered his opponent absolutely nothing. Karatsev tried his hardest to fight back, and he did better than most.

When Djokovic’s level finally dropped for a beat, he snatched a break back and pushed him all the way to two break points as he served for the set at 5-4, smiting a Djokovic set point by ending a 53-stroke rally with a winning drop shot. But even through his physical issues, the Djokovic serve has been lights-out on these lightning-fast courts. He saved both break points with enormous serves and punctuated his victorious set with a roar. He never looked back.

The past month in Australia is one that Djokovic will not soon forget. His early days in Adelaide were laced with controversy after his genuine but tactless attempts to help his players ended in another round of widespread criticism. Once the tournament started and there was the hope that his tennis would speak for itself, he has had to deal with the scourge of injury.

Now, his hopes have risen at the perfect moment as he prepares to face either Daniil Medvedev or Stefanos Tsitsipas in Sunday’s final. “I’m just very pleased with the performance,” he said. “It came at the right time. Before the last match in a grand slam, couldn’t be a better timing for me to play my best tennis.”

Djokovic and Karatsev departed the court satisfied for contrasting reasons. Karatsev’s life will never be the same; his new world ranking of No 42 will allow him entry into all of the ATP tournaments he pleases. The $850,000 (€770,998)) prize money this week is more than he had scraped together in the past decade of competition, and he will likely have more shots at Djokovic and his rivals in the near future.

Djokovic, meanwhile, is inching back to normal towards normalcy and will have an extra day of rest to consolidate his gains before the final. He may even train between matches for the first time since last Thursday. After a week of doubts, at least one thing is certain: usurping Novak Djokovic in the Australian Open final remains one of the most difficult feats in sport. - Guardian

Solskjaer’s son has the appetite for a go at Mourinho 18:50
Pep Guardiola in relaxed mood as Manchester City look to seal semi-final berth 18:23
Leinster face Sunday showdown with La Rochelle in Champions Cup 16:29
Return of club rugby will involve non-contact element after long lay off 15:28
Jadon Sancho ruled out of Champions League clash with Man City 14:51