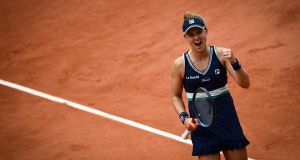 The world number 131, on her second appearance in the main draw of a Grand Slam, emulates Belgium’s Filip Dewulf, the only qualifier in either of the singles draws since tennis turned professional in 1968 to make it to the last four at Roland Garros, in 1997.

Svitolina, one of the pre-tournament favourites after winning the Strasbourg International last month, was on the back foot throughout, failing at the last-eight stage for the third time at the claycourt Grand Slam.

Should Trevisan prevail in her quarter-final, it would ensure a qualifier plays in the final of a Grand Slam for the first time in the Open era.