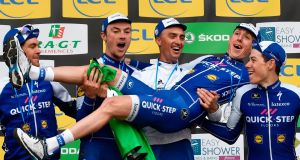 Dan Martin took the best Irish result in Paris-Nice since his uncle Stephen Roche was runner-up in 1990, finishing third overall in the event on Sunday.

Martin had started the day second overall, 30 seconds behind the race leader Sergio Henao (Team Sky). Both he and Henao were caught out by an audacious long-range attack by Alberto Contador (Trek-Segafredo), with the double Tour de France winner gaining enough time to make him race leader on the road.

Contador drove the pace up the final climb, the Col d’Eze, but his breakaway companions David de la Cruz (Quick-Step Floors) and Marc Solar (Movistar) refused to help on the run in to the finish line in Nice. Contador briefly gapped them but de la Cruz got back up to him and then came around him in the sprint, taking the stage win and – crucially – the maximum time bonus.

Contador picked up a smaller bonus for second but the chasing group containing Henao and Martin was just 21 seconds back.

This gap saw Contador overtake Martin in the final general classification but come up two seconds short in terms of the race victory. The Spaniard thus finished second overall, with Martin 30 seconds behind Henao in third.

“I couldn’t follow Alberto when he attacked,” said Martin. “So from that moment on it was a case of dropping Sergio , which I did on Col d’Èze, but the others chased me back immediately. When I realised the GC victory was out of the question, I said in the radio that David should go and seeing him win this stage is really great.

“I am extremely happy for him, he gave everything this week for us and deserves to be there.”

While the Irish rider was hoping to be able to challenge for the overall victory, he will nonetheless be encouraged by his showing this week. He finished ninth overall in last year’s Tour de France and his latest performance confirms that he is one of the best stage race riders in the current peloton.

“Third in the general classification at such a big as Paris-Nice is an important result in my career. It’s solid proof of how much I have developed since joining Quick-Step Floors, especially as I didn’t arrive here in the best condition.”

In addition to his third place overall, his QuickStep Floors squad also won the team classification. “I am also satisfied and super glad to see the entire squad on the podium at the end of this race, as this fantastic team spirit is what brought us at the top,” Martin said.

He will now continue his build-up to the spring Classics and, ultimately, the 2017 Tour.

In other news, national road race champion Lydia Boylan had a superb performance on Saturday in Spain, winning the final stage of the Setmana Ciclista Valenciana. She was in a breakaway group for the final eight kilometres of the race, then jumped clear with a kilometre to go and hit the line alone.

It was the first UCI victory for her British WNT team, which stepped up a level this season.