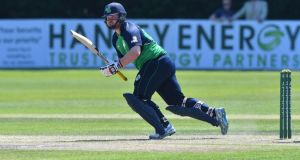 Paul Stirling raced to 49 off 20 balls before his dismissal as Ireland fell 28 runs short of Afghanistan’s 233 in their third T20 international. Photograph: Rowland White/Inpho

Afghanistan beat a spirited Ireland by 28 runs in their third and final T20I match in a game dominated by batsmen on both sides.

The hosts piled up an imposing 233 for 8 in their 20 overs - the most Ireland have conceded in the format - with Mohammed Nabi and Shahzad the destroyers-in-chief.

Shahzad smashed 6 fours and 5 sixes as he set the perfect platform for his team making 72 from just 43 balls.

Kevin O’Brien took four wickets as Ireland edged back into the game, but Nabi’s brutal assault was to be a match winning effort.

The Irish though were unfazed by such a challenging total, and with openers Paul Stirling and Stuart Thompson in belligerent mood, the target soon looked possible.

Stirling smashed 49 from 20 balls (6 fours, 3 sixes), while Thompson cleared the ropes five times in his whirlwind 43 from 18 balls.

Ireland had scored 91 runs in the power play- their best ever - but Stirling had departed, and when Thompson fell soon after, the momentum stalled.

He took three wickets in an over for the second match in succession, as five wickets fell for six runs - the Irish being dismissed for 205.

“It was a fantastic game of cricket to have both teams score over 200, so credit to the ground staff and to how the teams played,” said Ireland captain William Porterfield.

“It’s been a deserved series win for Afghanistan but there hasn’t been that much between the teams really, just five balls either way in the games. You cut down a few boundaries and you score a few more. You have to give it to them though as they’ve come hard at us and won the matches. You know in these games it’s going to come down to the last over or so. I was pleased with the way we kept coming and kept fighting to the end.”

Ireland now take on Afghanistan in a five-match ODI series which gets under way at the same venue on Wednesday and Porterfield is looking for his team to bounce back in the 50-over format.

“I’m really looking forward to the series. We’ve played some excellent cricket at times on what have been good pitches and great crowds. It’s a wonderful place to play cricket and the lads are fired up. We have a few players to come back into the squad and that will bring some freshness and experience.”

Afghanistan won by 28 runs and take the series 3-0.