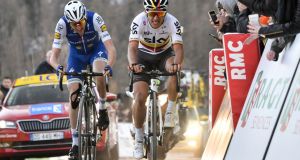 Ireland’s Daniel Martin of QuickStep Floors battles with Colombia’s Team Sky rider Sergio Henao towards the finish line at the end of the 177km seventh stage of the Paris-Nice between Nice and Col de la Couillole on Saturday. Photograph: Philippe Lopez/AFP/Getty Images

Dan Martin provided a further indication of his progress as a rider when he finished third on the queen stage of Paris-Nice on Saturday, going head to head with some of the best riders in the sport and proving he is now in the same category.

The QuickStep Floors competitor finished 32 seconds behind the day’s winner, Richie Porte, who was first to the line on the mountain stage to Fayence. Second was two-time Tour de France winner Alberto Contador, who finished 21 seconds back and 11 ahead of Martin.

The latter had started the day prepared to ride in support of team-mate Julian Alaphilippe, who was leading the race, but the young Frenchman weakened and slipped back. He finished 14th, two minutes 40 seconds back, and tumbled down the general classification.

Martin’s strong showing saw him leap to second overall, 30 seconds behind new race leader Sergio Henao. He will have the team’s full backing on Sunday’s final stage to Nice.

Given his proximity to the yellow jersey, the team may well find itself questioning its decision to require Martin to dedicate himself to Alaphilippe on Friday’s stage rather than allowing him to ride his own race. He has better past history in the big mountains and was arguably the team’s best chance of winning the race overall.

While he still has a chance of doing that, it may prove difficult to make up the half-minute gap on the final leg of the WorldTour race. It is just 115.5 kilometres in length.

The race was won by Seán Kelly and Stephen Roche in the past.