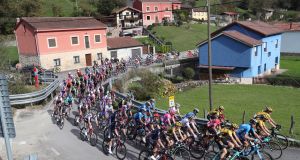 The pack in action during the 11th stage of the Vuelta a Espana 2020. Photo: Kiko Huesca/EPA

Some of them finished shortly before sundown on the mountain, their concern this time not seconds but minutes as the five categorised climbs one after the other took their expected toll on the peloton.

In the end the Alto de La Farrapona couldn’t shake up the leading trio, Dan Martin producing another superb effort to take seventh on the day, finishing just ahead and therefore staying within 30 seconds of the leaders Primoz Roglic and Richard Carapaz, although for others Stage 11 of the Vuelta a España was all about survival.

French rider David Gaudu of Groupama-FDJ was first over line - a first Grand Tour stage win for the 24 year-old - after just under five hours in and out of the saddle on the 170km stage from Villaviciosa, the original seven-man breakaway by then reduced to two, with Stage 2 winner Marc Soler finishing four seconds down, the Spanish rider from team Movistar moving himself into the top 10 in the process.

After trailing that breakaway at one point by three minutes and 20 seconds, before the 16.5km climb of la Farrapona, Martin and company had it reduced to just over minute on the line, the Irish rider coming home one minute and three seconds down, repeating his seventh place from Friday, in the same time as Carapaz from Ineos Grenadiers (ninth) and Roglic of team Jumbo-Visma, (10th), but gaining another seven seconds on Britain’s Hugh Carthy, who is now over 30 seconds behind Martin in fourth.

Martin also moves to outright second in the points classification, with 91 points to Roglic’s 135, worth watching should Slovenia’s defending champion falter in anyway way, and which also means Martin will again wear green on Stage 12.

Otherwise the day’s advantage on Roglic and Carapaz may only by psychological, but noted nonetheless. “I always love racing in the mountains,” said Martin, the Israel Start-Up Nation rider once again timing his effort to perfection and never once allowing Roglic or Carapaz out of sight. “So happy to be near the front again, it’s such a huge weekend and one of the most difficult stages of any race on the 2020 calendar so tomorrow will be another big test.”

Indeed it will, finishing atop the iconic Angliru. For now Roglic and Carapaz are still on the same time, defending champion Roglic wearing the red jersey by virtue of his better stage placing so far, with Martin 28 seconds back. With eight days and seven stages before the finish line in Madrid, Martin remains perfectly poised for his first Grand Tour podium finish.

As expected the gaps for many other riders were in minutes, substantial at that, Sam Bennett coming through after Friday’s rough ride onto the Cantabrian Mountains in the north country with some question marks over his levels of fatigue, but he made it home well within the time limit of 16 per cent, or 47:04, finishing 139th on the day, 36:02 in arrears, which meant he was in and out of the saddle for over five and a half hours, once again with his faithful Deceuninck-QuickStep team mate Michael Morkov for company.

Five riders didn’t finish the stage, another didn’t start, which means only 151 of the 176 that started out remain. French rider Guillaume Martin, no relation to Dan, extended his lead in the king of the mountain classification, with Sunday’s Stage 12 is a more punchy 109.4km, before finishing atop that iconic Angliru.

Stage 11 started out with a brief protest from the riders after the UCI, the governing body of world cycling, revised mid-stage the time gap rule, which effectively denied Carapaz the red jersey for the day; normally, in bunch sprints, time gaps are only counted if there is a gap of three seconds or more between groups, only the UCI decided Stage 10 should be the decided on the usual one-second gap, to some dismay among the riders.