Men’s Hockey: Return of Ireland indoor squads a boost for the sport 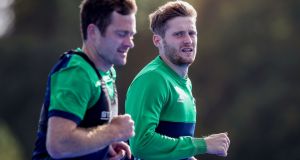 It’s an exciting time for Irish indoor hockey with the re-establishment of the men’s and women’s senior national teams after a 30-plus year hiatus.

The men’s squad travel to Santander in Spain in mid January for the Euro Indoor Championships III.

The team has fallen back a bit since it played in the last tournament at home in Loughlinstown Leisure Centre in Dublin in 1987. It seems like a long time to have been beating the drum, which, for the millionth time, sharpens up the bigger outdoor version, generates closer skills and gives players confidence in confined space and under pressure with the ball.

Now the indoor and outdoor national teams are separate which, given the commitments to qualifying for World Cups and Olympic Games, is the correct pathway. Few players could commit to both versions.

Back in 1987 the players were largely, if not all, derived from the national outdoor squad, then ranked at 12 or 13 in the world (official rankings did not exist). But the indoor squad was very much an add-on.

There is also a view that indoor should be respected and consideration given to a short winter season of its own, an idea practised in European countries and more realistic these days.

Playing cricket in the summer was the historic reason the outdoor hockey didn’t run into the summer time. That is no longer a valid reason.

Ireland are in a group with hosts Spain, Scotland, Slovenia and Wales with only a top spot earning promotion to the second tier. There are no scheduled EY Irish Hockey League fixtures this weekend.

1 Owen Doyle: Creeping professionalism of schools rugby a threat to the game
2 GAA officials and referees brace themselves as new rules kick in, and this time it's for real
3 Rugby under threat; Niall Quinn steps into FAI breach
4 Niall Quinn happy to step into the breach at FAI
5 Scotland’s Finn Russell missed training after Sunday drinking session
Real news has value SUBSCRIBE