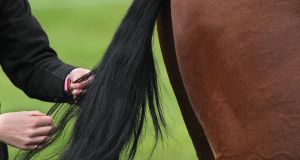 Kildare’s Heike Holstein was crowned national dressage champion for the 12th time on Saturday at Cavan Equestrian Centre where nine-year-old Oscar O’Connor took the honours in his category at Novice level.

Holstein, who headed into Dressage Ireland’s national championships as the most successful rider in the event’s history, won the Grand Prix on the home-bred mare Sambuca (by Samarant) having comfortably topped the scores of all three judges for a combined mark of 67.029 per cent. England-based Irish international Dane Rawlins finished second with Espoire (64.058).

From Cleariestown in Co Wexford, O’Connor dominated the Novice Category 1 championship, winning both Friday and Saturday’s tests with the eight-year-old Westfalian pony Top Hero 2. The final champion crowned as the three-day show concluded late on Sunday afternoon was Anne Marie Dunphy who won the Grand Prix Kür with Urbanus.

Irish international show jumping riders were in action on both sides of the Atlantic over the weekend with Denis Lynch rounding off his visit to Waregem in Belgium when picking up €27,000 for his fourth-place finish on The Sinner in the 1.60m Grand Prix. The host nation’s Niels Bruynseels won the class on Lady Cracotte which earned him a BMW worth €70,000 plus €19,100.

With a fence down in the jump-off round, Shane Sweetnam finished best of the Irish in seventh with Main Road in the 1.60m Longines FEI World Cup class at the New York venue on Sunday. The top six places went to US riders with Molly Ashe Cawley winning the American Gold Cup when clear in 36.76 on D’Arnita. The only other rider to break the 37 second barrier, and go clear, was Margie Goldstein-Engle who claimed the runner-up position on Royce (36.85). Ward was well up on time (33.59) but had a fence down with Contagious and had to settle for fifth.

Having been beaten by Azerbaijan in Friday’s semi-final of the European polo championship, the Irish team of Michael Henderson, Creighton Boyd, Max Hutchinson and Stephen Hutchinson beat Germany 5.5 to 5 in Sunday’s third-place play-off. Italy won the final when seeing off Azerbaijan by 8 to 4. In the ladies’ championships, the hosts went down 4.5 to 9 to Germany.