Cody and O’Shea’s secret is there is no secret

Great coaches don’t pretend they always know what they are doing: they just do it 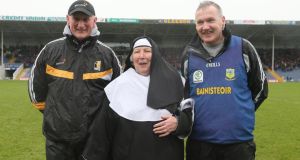 Brian Cody (left) and Eamon O’Shea (right) are accidental coaches in a way, facilitators and nurturers of talent who do not pretend to know more than they do. Photograph: Lorraine O’Sullivan/Inpho

In The Crooked Ladder, his latest contribution to The New Yorker, he suggests the early Mafia were neither proper criminals, nor ever intended to be.

They came from Sicily and settled in Little Italy. They imported olive oil and ran minor loan operations. When loans couldn’t be repaid they took stakes in the debtor’s business. Later that spilled into gambling and bootlegging and other facets of organised crime.

Gladwell quotes from A Family Business, written in 1972 by and about the Luppollo clan – a sort of real-life version of The Godfather (released that same year).

Unlike Don Corleone, the Luppollos weren’t into blood oaths or splashy gunplay. They used crime to climb the “crooked ladder” of social mobility, with the ultimate goal of respectability.

None of the Luppollos were textbook experts in criminality, or claimed to know all the secrets of their game. Most of them hadn’t a clue. It didn’t stop them from becoming enormously successful.

Gladwell could have carried on his theory into coaching: not many successful coaches are textbook experts in their game, or claim to know all the secrets; some were neither proper coaches, nor ever intended to be.

“What is your secret?” he was asked in the recent BBC documentary about David Rudisha – 100 Seconds to Beat the World.

“What is your secret?”

“The secret is in the head. Not in the legs. It’s the determination. The passion. The interest. The commitment. The focus. The dream. But these are not secrets. These are true of any successful person in life. Or any person who can rise above the ordinary.”

O’Connell didn’t have a clue about distance running when he came to St Patrick’s High School in Kenya in 1976 – and nearly 40 years later, this “secret” is still creating world and Olympic champions, the latest being Rudisha himself.

When I visited him at St Patrick’s a couple of years ago O’Connell wasn’t carrying around training diaries or fancy flip charts. What had worked for Wilson Kipketer definitely wasn’t going to work for Rudisha, or any other athlete, and that reinforced the notion that the secret of his coaching was that there was no secret at all.

Any textbook of coaching, I suspect, would have been promptly torn up – just like the late Robin Williams character, English teacher John Keating, does metaphorically for his pupils after introducing them to Understanding Poetry, by Dr J Evans Pritchard, Ph D, in the film Dead Poets Society.

This also seemed to be the theory coming out of both Kilkenny and Tipperary ahead of tomorrow’s All-Ireland hurling final. Neither Brian Cody nor Eamon O’Shea did not offer up any great coaching secrets .

Cody had no major coaching experience, outside of his club James Stephens, when he took over the Kilkenny senior team in 1998, and that hasn’t stopped him from becoming enormously successful (nine All-Ireland titles, eight National Leagues, etc).

“As far as I’m concerned, there is no Gospel,” he says of his secret. “We don’t have the Gospel in Kilkenny. And nobody else has the Gospel either. There are players that play the game and you try and get players to play to their strengths. Obviously you trust the players implicitly. But the players have to react to whatever situation develops on the field of play.”

Both Cody and O’Shea have also brought in coaching assistants who aren’t even hurling men, nor ever intended to be.

Michael Dempsey looks after the physical training of the Kilkenny hurlers, even though he never played the game in his life - all that experience being with Laois football.

“It’s not an exact science,” says Dempsey, who actually lectures in Sports Science, at Carlow IT. “It’s the coaching eye, and a lot of that is an art. The science is there to help you. But I think there is an art involved in getting teams right for the big occasion.”

This year, Gary Ryan was brought in as fitness trainer in Tipperary, and although a native of the county, he’s a sprinter, not a hurler – the former Irish record holder over 100 metres, who ran the 200m at the 1996 Olympics in Atlanta.

Ryan is also the latest in a long line of former athletics specialists bringing their eye and ear to Gaelic Games, and many of those were never proper coaches, nor ever intended to be. But then the last thing any coach will admit to knowing these days is the secret to success, when at least part of the secret is not having a clue.