Church of Ireland give themselves a lifeline

Victory over Monkstown boosts hopes of an incredible escape 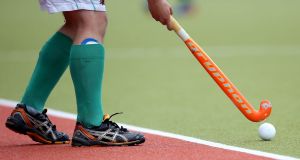 Lisnagarvey took a huge step towards the EY Hockey League title with a victory over Glenanne. Photograph: Ryan Byrne/Inpho

While Lisnagarvey look to have sewn up the men’s EY Hockey League title, the major intrigue surrounds the bottom end of the table after Cork C of I snatched a big 3-1 win over Monkstown on Sunday.

It was Denis Pritchard’s side’s second win in three outings having gone 16 months without a victory in the league and now has the Garryduff men dreaming of an incredible escape.

They lost 2-0 on Saturday at home against the same Monkstown opponents 0 as the fixture calendar continues to throw up odd quirks.

But they must have worked the oracle in the video analysis as they stormed out of the blocks at the Merrion Fleet Arena with John Jermyn scoring twice in the first 12 minutes.

Indeed, they controlled the first half, creating multiple chances and they moved further clear with 25 minutes left via a twice-saved penalty corner, Phil Brownlow eventually gobbling up the chance. Teenager Ben Hickmott got one back for Town but C of I are now level on 10 points with Cookstown.

The Tyrone side are three goals better off on goal difference but have a tough run-in against playoff -bound Three Rock Rovers and third-placed Banbridge. C of I have just a home game against Rovers to play.

Garvey’s battle with second-placed Glenanne proved to be a comfortable 5-1 victory with Nelson brothers Daniel and Matthew scoring early goals. Johnny Lynch and Andy Williamson made it 4-0 at half-time and they were never in much trouble.

Pembroke scored the most remarkable win when they hammered Banbridge 5-2 just a week after a harrowing 8-1 defeat against Three Rock. Veteran Paddy Good, playing his first game of the season, scored twice.