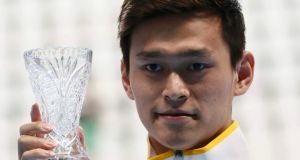 China’s Sun Yang was a shock late withdrawal from the final of the men’s 1,500 metres freestyle at the world championships on Sunday.

Sun, the reigning world and Olympic champion and world record holder, was the hot favourite for gold but did not show up at the starting blocks despite having warmed up for the race.

There was no immediate explanation from the Chinese team as to why Sun pulled out. Italy’s Gregorio Paltrinieri won the gold in his absence.

Paltrinieri was shocked by Sun’s absence.

“I never saw him today,” the Italian told reporters.

“We were speaking yesterday together and that the race would be a nice one. It was really disturbing to swim without him. It was a really tough race without him.”

The 23-year-old Sun had earlier won the 400m and 800m freestyle titles and finished second in the 200m at the championships.

Despite Sun’s feats in the pool he has been a polarising and controversial figure on dry land and his withdrawal from the final was just the latest in a series of incidents.

At London in 2012, Sun became the first Chinese man to win an Olympic swimming gold medal when he took the 400m and 1,500m freestyle double, getting a reprieve after a false start in the heats.

In the three years since, however, his life has been troubled.

In 2013 he found himself in hot water with Chinese swimming officials for missing training sessions and was suspended from engaging in any commercial activities, which had flooded in after his Olympic success.

He then fell foul of the law and spent a week in jail for crashing a car that he had driven without a licence.

China’s swimming authorities responded by slapping a blanket suspension on him, banning him from training and competition.

It emerged last year that Sun had secretly served a three-month ban after testing positive for a banned stimulant.

The China Anti-Doping Agency could have imposed a longer ban but opted for a lenient punishment because Sun had been given medication by a doctor to treat a heart issue and was unaware it had been added to the World Anti-Doping Agency’s banned list.

4 Liverpool leaning on Salah more than ever right now

Liverpool leaning on Salah more than ever right now 11:20
Four Leinster players nominated for European Player of the Year award 10:37
Chelsea have a free hit from here but may not get a better shot at it 08:49
Liverpool eyeing another comeback; Outline plan for return of club rugby 07:35
Seán Moran: DRA saving the GAA a lot of money for 16 years 06:00