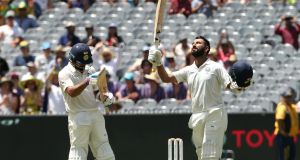 Cheteshwar Pujara’s century formed the backbone of a dominant Indian batting display before Australia’s openers survived a few nervous overs as the home side reached eight without loss at the end of a scorching day two in the third Test in Melbourne on Thursday.

Marcus Harris was five not out, with Aaron Finch on three as Australia started their response to India’s 443 for seven total, with the home bowlers made to toil until half an hour before stumps on a grudging MCG wicket.

In a brief and fiery spell, paceman Jasprit Bumrah struck Harris on the helmet with a short ball but the rookie opener rose to his feet quickly and resumed after lengthy attention by medical staff.

With the four-Test series locked at 1-1, much will depend on how the MCG’s maligned drop-in wicket performs for an Australian batting order still finding their feet.

But the home side’s hopes of taking a lead into the final Test in Sydney would seem slender.

Although they failed to make a breakthrough, India’s bowlers will head into day three hopeful of making some early inroads after they beat the bat with a slew of deliveries, but Finch feels all three possible results remain on the table.

“We’ve very confident we can bat really big, bat well and put India under pressure again,” he told reporters. “This wicket is deteriorating a lot more than probably what we thought it would.”

Having gone to stumps at 215-2 on day one, India’s batsmen enjoyed another dominant day, with an obdurate Pujara scoring his second century of the series and skipper Virat Kohli adding 82 in a steady 170-run partnership.

Rohit Sharma, back in the side after missing the second Test in Perth through injury, also contributed an unbeaten 63 before Kohli declared following Ravindra Jadeja’s caught-behind dismissal for four.

India’s cause was given a huge help by their opponents’ sloppy fielding, with Australia grassing two catches under a blazing sun to reprieve Rohit and wicketkeeper Rishabh Pant (39).

The tourists’ batsmen had little trouble dealing with spinner Nathan Lyon, who had to wait until after tea to grab his first wicket when he trapped Ajinkya Rahane plum in front for 34.

Earlier, pace spearhead Mitchell Starc denied Kohli a second century of the series when he had him caught ramping to third man before Pat Cummins bowled Pujara for 106, after the watchful batsman registered his 17th Test ton.

Pujara, who scored a match-winning 123 in the series-opener in Adelaide, was removed by a virtually unplayable delivery that kept low and nipped back off the seam to clip off-stump.

“I don’t think it’s easier to bat now,” he said. “So from tomorrow onwards, I think it will get difficult to bat and our bowlers have been bowling well.”

Trent Boult needed just 15 balls to change the complexion of the second Test against Sri Lanka on Thursday when the New Zealand seamer took six wickets in a devastating spell to ensure his side took complete control at Hagley Oval in Christchurch.

Boult finished with career-best figures of six for 30 to help bowl out the visitors for 104, giving New Zealand a valuable 74-run first innings lead in the series decider.

Jeet Raval (74) and Tom Latham (74 not out) then put on an 121-run opening partnership, while captain Kane Williamson scored 48 as the hosts took firm control of the game.

Ross Taylor was unbeaten on 25 alongside Latham at the close of play on the second day with New Zealand on 231 for two and holding an overall lead of 305 runs.

Sri Lanka had resumed on 88-4 with first Test centurion Angelo Mathews on 27 and Roshen Silva on 15, and appeared to be comfortable as they looked to take a big chunk out of New Zealand’s modest first innings of 178.

After starting play with figures of 0-20 from 10 overs, Boult then produced one of the most destructive spells in Test cricket as he took six wickets for four runs in the space of 15 balls, including three victims in four deliveries.

Boult, who had bowled well on the first day without much luck, had Silva (21) and Niroshan Dickwella (four) both caught at third slip by Tim Southee, who saved New Zealand’s innings on Wednesday with a swashbuckling 68, to open his account.

The 29-year-old then had Dilruwan Perera and Suranga Lakmal trapped lbw on the fifth and sixth balls of his 14th over.

Dushmantha Chameera, however, survived the hat-trick delivery on the first ball of Boult’s 15th over but was trapped in front on the next.

Lahiru Kumara then became the fourth successive lbw decision for a duck to the left-armer on the final delivery of the over as Sri Lanka were dismissed for 104, a measly total that left them fighting to stay in the two-match series.

The first Test in Wellington ended in a damp draw last week after rain washed out virtually all of the final day’s play.

1 Brendan Rodgers says he was ‘really knocked’ by coronavirus
2 Farrell and O’Connell provide insight into changes in Ireland’s analysis
3 Sideline Cut: Vignette shows why Bird is the true shark in The Last Dance
4 Niyi Adeolokun and Tom McCartney among Connacht departures
5 Liverpool and Everton to oppose plans to play games at neutral venues
Real news has value SUBSCRIBE

Brendan Rodgers says he was ‘really knocked’ by coronavirus 19:02
GAA preparing for earlier return to activity but pitches to remain closed 18:07
HRI announces full jumps programme up to start of August 17:03
La Liga season to restart on June 11th with Sevilla-Real Betis derby 16:26
Liverpool and Everton to oppose plans to play games at neutral venues 17:18
Here is your handy guide to sport on television this week