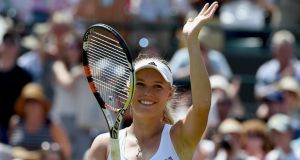 Caroline Wozniacki has matched her best Wimbledon performance after she beat Camila Giorgi in straight sets to reach the fourth round. Photograph: Epa

It seems a long time since Caroline Wozniacki sat atop the world rankings for 67 consecutive weeks in 2010 and 2011. But there have been resurgent signs over the past 12 months that she is capable of breaking the grand slam duck that has hovered over the Dane ever since that period of dominance.

On a becalmed No1 Court, she progressed effortlessly to the fourth round with a 6-2, 6-2 victory over the Italian 31st seed, Camila Giorgi. The Dane swatted aside the hard-hitting Giorgi to match her best ever performance at Wimbledon. It is one curiosity among several in the 24-year-old’s career that she has never progressed beyond the last 16 at SW19.

Wozniacki endured a mildly troubled build up, pulling out of her Eastbourne semi-final with a back problem. It does not appear to have affected her since, however, and there was to be no repeat of her wobble in the second round, when she let slip a 5-1 lead in the second set against Denisa Allertova before sealing victory in the tie-break.

Giorgi has an unusual game in that she attempts to belt the cover off the ball with every shot, seeking winners at every opportunity. It made for an intriguing match-up, given Wozniacki’s consistency and tendency to play the percentages.

Giorgi’s abandon can make for some spectacular winners when the 23-year-old is on song but to a string of unforced errors when she is not. The count hit 20 during the opening set alone. Wozniacki, in contrast, made none.

The result was no foregone conclusion. The Italian had won two of their three previous encounters, including a 2013 encounter at the US Open, but appeared nervous to begin with and tossed away her opening service game.

She rallied briefly in the first set and managed to break back almost immediately, her whipped forehand drawing occasional gasps from the crowd, but Wozniacki was too consistent in her returns and wore a beaming smile as she milked the acclaim after serving the match out.

There were flashes of style too, not least in a couple of imperious lobs as her opponent attempted to attack the net.

Statistics do not always tell the whole story but on this occasion they were pretty comprehensive. Giorgi made 30 unforced errors in total to Wozniacki’s three and, despite hitting 19 winners to the Dane’s 12, was too erratic to trouble her.

Wozniacki was still smiling when she reached the locker room, a contrast from her testy exchanges with reporters following her second round victory when she appeared to get annoyed after one question too many on her opponent.

As she said after this latest win, beating the Italian was a case of serving well, making her returns and waiting for her opponent to make a mistake. Wozniacki said: “I was very happy to win this one. She is such a tricky opponent, she hits so hard. I was really pleased how I managed to keep my composure in the end. I’ve been playing really well this week.”

Wozniacki has now progressed to the fourth round without dropping a set and occupies a position in the more favourable half of the draw.

Aware that sterner tests await, she will be grateful for an outing in which she barely had to break a sweat despite the still sweltering conditions. Up next is Spain’s Garbiñe Muguruza.

“I served well and returned well. It’s nice and warm but it’s cold compared to some of the hot days in Australia,” she concluded, raising an eyebrow at the enduring British fascination with sun in summertime.