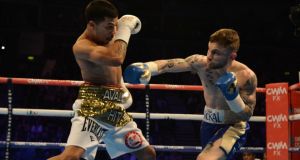 Carl Frampton throws a right at Chris Avalos during the IBF super-bantamweight world title fight at the Odyssey Arena on in Belfast. Photograph: Charles McQuillan/Getty Images

The local favourite was making the first defence of the world crown he won by defeating Kiko Martinez last September and he did not disappoint his vocal home fans on Saturday night.

Frampton rocked his American opponent in the second round and then stepped up his assault in the fifth before referee Howard John Foster stopped the contest midway through the round.

After disposing of Avalos, Frampton quickly turned his attention to a potential showdown with England’s Scott Quigg, the WBA regular world champion.

Frampton said: “I would love it. I think Scott wants it, it’s a summer showdown between the both of us. It’s a massive fight but Scott needs to remember who’s the real world champion.”

The 28-year-old added he would be happy to fight outside of Belfast in order to guarantee an encounter with fellow unbeaten fighter Quigg, who was ringside to see his rival bolster his standing as one of the best fighters in the division.

“I would leave Belfast if I had to. Maybe somewhere neutral, it doesn’t matter to me,” he added.

“I think Scott would agree with me. It’s the biggest fight in the UK (other than) Amir Khan-Kell Brook possibly, but I think this one’s been brewing a lot longer. It’s a huge domestic showdown.”

Quigg – who holds a secondary version of the WBA title, with Cuban Guillermo Rigondeaux the body’s Super champion – is just as keen to arrange a bout.

“This fight is big, not because of him not just because of me, it’s the full package. The British public want the fight,” he said.

While boxing politics may yet stand in the way of a mouthwatering contest, Frampton can take heart from his performance that extended his record to 20 wins from as many professional bouts, with 14 knockouts.

He was shoved by the challenger at a heated weigh-in on Friday, but Frampton showed no sign of that affecting him on Saturday night.

Both fighters landed solid shots in an opening round where Avalos was also warned after twice punching on the break.

The Californian claimed his arm was hurt in the second and Frampton took advantage of his lack of focus to land a punishing right hand that brought most of the partisan crowd to their feet.

Avalos was holding his own in the third and fourth but it was Frampton who was consistently beating his opponent to the punch and landing the more telling blows.

Avalos was backed into the ropes at the beginning of the fifth, when a flurry of punches reined down to leave him shaken and although he was on the floor soon after, referee Foster correctly ruled no knockdown.

Yet he was still on unsteady legs and Frampton continued to land powerful right hands at will, leaving Foster no option but to step in and bring a halt to proceedings.

Frampton’s win was the perfect birthday present for his manager, mentor and promoter Barry McGuigan, the former WBA featherweight champion.

McGuigan, who turned 54 on Saturday, said of his charge: “This is the best super-bantamweight in the world. There are aficionados out there who think Rigondeaux is.

“He’s the best super-bantamweight in the world. That includes Leo Santa Cruz, Scott Quigg and Guillermo Rigondeaux. He’s a sensational fighter and over the next couple of years we’re going to prove that.”