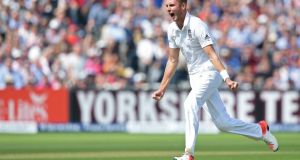 England’s Stuart Broad celebrates taking the wicket of Australia’s Chris Rogers for 6 runs on the second day of the third Ashes cricket test match between England and Australia at Edgbaston. Photorgraph: Paul Ellis/Getty

First, on an overcast Nottingham morning, came Stuart Broad with the most devastating bowling of his life. Later, in the afternoon, when the clouds had dispersed and the sun beat down, it was Joe Root with a sublime unbeaten eighth Test match century. Alastair Cook wanted heroes, and here they were.

By the evening, it was this pair who between them had bowled and batted England to a position in the match that, even with four days to go, is already formidable, the best opening day for them in an Ashes Test since St Stephen’s Day in Melbourne in 2010-11 when they dismissed Australia for 98 and were 157 without loss at the close; perhaps even better.

By any standards, it was an astonishing day’s play, characterised by a display of England bowling and catching brilliance and one of truly staggering ineptitude by the Australian batting.

Put in to bat, they were two wickets down by the time the first over was done; Michael Clarke, having retreated down the order to five, was at the crease with the second over only two balls gone; half the wickets had been taken with the match less than half an hour old; and with lunch still 20 minutes away, the England opening pair were strapping on their pads. Before three o’clock England had a first-innings lead.

Australia had succumbed to Broad, who with his first wicket became the fifth England bowler to reach 300 Test wickets and with his last equalled the 307 of Fred Trueman. Broad finished with eight for 15 from nine overs and three balls, as Australia were dismissed for only 60, with Mitchell Johnson, 13, and Clarke, 10, alone in reaching double figures, and extras making a bid for the No6 spot for the Oval Test by top scoring with 14.

Adam Lyth went cheaply and so too Ian Bell, although no real blame should be attached to either as they received fine deliveries from Mitchell Starc. Starc was to gain the further wicket of Alastair Cook too, although not before the England captain had made 43 and seen off the hardness and shine of the new ball.

By then though Root had arrived, creamed his first two dozen runs in boundaries, and helped Cook add 62 for the third wicket.

Cook’s departure brought in Bairstow to join his Yorkshire team-mate and in the evening session in which 175 runs came, they put the Australian bowling to the sword, Root reaching his hundred from 128 balls with his 17th boundary.

Bairstow played outstandingly well almost to the close, helping Root add 173 for the fourth wicket before he clipped a catch to midwicket, out for 74. Root will resume the second day on 124, having faced 158 balls, with 19 fours and a six.

England, for their part, have made 274 for four, which on its own would represent a good tough day’s work on this pitch, but with a first-day lead already of 214 is scarcely credible.

Already, this match has been three bells on the statistical fruit-machine, a veritable jackpot of figures.

When Broad had Michael Clarke caught at slip, he had taken only 19 deliveries to claim his 14th five-wicket haul, something only the Australian Ernie Toshack had equalled. His analysis was the eighth best in an all-time England list and the finest since Devon Malcolm told the South Africans they were history in 1994 and took nine for 57.

Of England bowlers, only SF Barnes, against South Africa in 1913, has taken five wickets before lunch on the opening day of a Test.

If one fleeting moment summed up the depths to which these Australians have plumbed, it came with Broad’s dismissal of Clarke. This is a man who, for all the bravado and work ethic – first in the nets and all that – is a cricketer swimming against a very strong tide. Australia needed their captain, one of the most accomplished ever Australian batsmen, to stand up and lead. Instead, having made a scrappy 10, he launched a wild drive at a wide ball from Broad, that flew from near the toe of the bat high to first slip where his opposite number made a sharp chance look simple. It seemed to encapsulate their relative plights: Cook is a man in charge of his team, Clarke a man with a scrambled mind clinging on to his credibility.

How to explain what happened to Australia? This was a tricky pitch but not exceptionally so: it did enough but not too much. Put simply, they have no more clue now how to play the ball that swings a little or seams, than they had at the start of the series. Guardian Service