Big difference between boxing and MMA is ‘effort-to-pause ratio’ 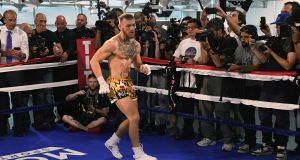 Few question Conor McGregor’s ability as a fighter. But can he box? After all, though McGregor has trained as a boxer, mixed martial arts fighting is extremely different from the relatively controlled rules of boxing. It’s easy to imagine a jack-of-all-trades, master-of-none scenario that leaves McGregor unprepared to fight Floyd Mayweather, one of the best boxers of all time.

But Andre Ward, the light heavyweight world champion and one of the best pound-for-pound boxers in the world, believes that McGregor’s most obvious weakness – his lack of boxing experience – is also what makes him more dangerous. “Obviously McGregor is at a glaring disadvantage because they are competing at Mayweather’s craft, his discipline,” says Ward, “but McGregor’s advantage is that he is different, he’s an unknown, Floyd doesn’t know what to expect.”

Ward has seen the videos posted by the McGregor camp, and while they display McGregor’s rough-around-the-edges boxing style, he thinks they also show his unpredictability as a fighter. “I’ve sparred with MMA guys as well and it’s harder than you might think, it took me a while to figure them out.”

However, most of the talk has been about McGregor’s adjustments to a new style. Those differences start with the shape of the ring itself. Duncan French, vice president of performance for the UFC Performance Institute, believes the shape of a boxing ring, versus the UFC octagon, significantly affects the tactics of a fight. “Octagons don’t have corners, whereas boxing rings do,” says French. “From a tactical perspective, athletes can get trapped in a corner or a fighter can use them to keep an opponent in a specific part of the ring.”

Another consideration is the ropes of a ring, allowing boxers to avoid punches, a tactic unavailable to UFC fighters in the cage. The transition from UFC to boxing is more than just learning how to stay out of the corners, requiring a different fitness level and approach.

While there are important differences in the length and number of the rounds for championship-level bouts in both sports (five rounds of five minutes for UFC; 12 rounds of three minutes for boxing), for French the discrepancy lies in the tempo of boxing. “Importantly, the biggest difference between boxing and MMA is the effort-to-pause ratio, which essentially defines the tempo of a fight,” says French. In boxing, the effort-to-pause ratio averages 3-1, but in professional MMA that ratio is flipped to 1-4, primarily due to the impact of grappling and ground fighting.

The bottom line is that boxers tend to spend more time working, and less time regrouping, forcing McGregor to condition differently for the fight. For McGregor, each round will be shorter, but probably more effortful. To prepare for the difference, McGregor utilised techniques such as hypoxic training at the UFC Performance Institute in Las Vegas, adapting his basic physiology and conditioning to meet the rigors of a 12-round boxing match.

Of course, focusing on just boxing influences preparation as well, as it removes a large portion of the technical training an MMA fighter would normally do. An MMA fighter would normally prepare to kick, grapple and strike, and defend against the same. This of course doesn’t mean that McGregor, considered a world-class striker, is unaccustomed to punching. “Conor is one of the best strikers/punchers in the UFC, with knockout power,” states French. “As an MMA fighter, he has addressed the specific conditioning needs for punching/boxing, but everyone knows that his punching power was already outstanding.”

Cue up some videos of boxing and MMA and it will be apparent that movement in the two styles can also be very different, largely owing to the fighting stance and technical skills used in each. Boxers stand side-on to minimize the target area, according to French, but MMA fighters stand further away from an opponent and often stand in an open stance to avoid kicks or takedowns. “MMA fighting requires the athlete to consider attacks by many different methods, whereas boxing is largely coming from a very specific zone,” says French.

Ward counters those who assume McGregor is in it for the cash. “I’m inclined to believe he won’t just go away.” The Irish fighter has “a whole country behind him. This is more than just a money grab, it’s a pride thing. Because of that, in some way – small or big – I expect McGregor to revert back to his UFC fighting style.” For fight fans, that potential easing of McGregor’s restraints – a hold or knee – is part of what makes the fight worthy of the near-$100 pay-per-view investment.

McGregor also has one distinct advantage for which Mayweather has no counter: his age. “Floyd might be in great shape, but it’s still great shape for a 40-year-old. Great shape for a 29-year-old (like McGregor)is something different, and it’s been two years since Mayweather last fought,” Ward says. The age differences might affect Mayweather’s training and his ability to recover, and rob him of speed and quickness.

Another much-discussed factor is the recent decision by the Nevada state athletic commission to allow the fighters to wear eight-ounce gloves, rather than the 10-ounce gloves normally mandated for the contracted weight class of 154lb. Though seemingly a slight change, the decision was criticised by the Association of Ringside Physicians in a recent statement:

“This is a bout that has already been set at a specific weight class. Unless there is scientific evidence to support the view that such a change might improve the safety of this bout, we would strongly caution against allowing current regulation to be overruled.”

“Advantage Mayweather,” says Ward. The lighter padding of the eight-ounce gloves will allow the fighter landing more punches to inflict greater damage, which Ward presumes will be the counter-punching Mayweather. Of course, McGregor’s powerful left hand, regardless of glove weight, is capable of ending the fight well before conditioning becomes a factor.

Ward believes that while both have powerful incentive to win, the pressure is on Mayweather. “Floyd has got his legacy on the line and for him, anything less than dominating the fight will be seen as a loss.”

Of course, for all the talk of similarities and differences, the allure of the fight lies in the fact that no one really knows what will happen on Saturday evening. Expect the unexpected.