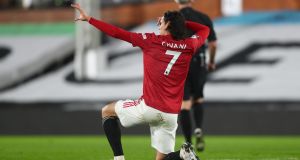 Out of nowhere, gliding across the box unnoticed with long black locks flowing, Edinson Cavani springs into the air and nods the misfired shot into the back of the net.

With movement so stealthy and so swift, you’d easily mistake Cavani for a ballet dancer.

As it happens, two months earlier the striker had swapped the football boots for the pointe shoes of ballet to train in his homeland of Uruguay at the Ballet Nacional de Sodre (BNS). At 33-years-old, recently released from Paris Saint-Germain, ballet provided a way to work on strength and stamina whilst looking for a new club.

The images shared by the ballet company had soccer fans’ heads turning when they emerged. Such a sports star dabbling in ballet may have seemed unheard of, but it wasn’t a new trend.

In 2017, over in the United States, St Paul Ballet and Element Gym’s boxers formed a partnership. The premise was simple: the ballet dancers box and the boxers dance ballet. Not simply as a social experiment but, for the boxers, to enhance footwork and balance.

The more you look, the more you find. American Footballer Eddie George spent hours forcing his 245lb body into demi-pliés and spins so it would become second nature on the field. England women’s rugby star Zoe Aldcroft spent her formative years balancing rugby with ballet and is now the Rugby Players’ Association England player of the year. Aldcroft draws similarities between the rehearsed moves of a lineout and those of a dance class.

Former England rugby league international Darrell Goulding now coaches Wigan Warriors’ under-19 squad, another group who have dipped into ballet in the past.

“The season before we started we had quite a lot of ankle injuries and stability issues, so it was something we were keen to look at,” Goulding tells The Irish Times. “Obviously our lads are not built for some of the ballet work, so a lot of the delicate stuff we didn’t progress to, but we used a lot of the simple drills to focus on that ankle area.

“After that season we did the ballet, we’ve not had so many ankle injuries, so the evidence shows it’s had some benefit.”

Now the group look to other disciplines to get one up on opponents, trying their hand at soccer drills or even kabaddi – an Indian sport requiring equal parts physicality and agility. If you’re able to think outside the box, there are match-winning gains to be made.

“Pound for pound, ballet dancers are the strongest athletes you will find,” remarks ballet physiotherapist Luke Abnett, who believes the cross-sport benefits that ballet can offer are evident.

“In ballet, there’s a need to not only have strength of movement but precision of movement. It’s a combination of the strong movement muscles with the fine-tuning stability muscles.”

So when Cavani glided past the Southampton defence to score that goal last November, it doesn’t take a lot to deduce where his graceful movement came from.

“When you get to more advanced levels of ballet skills, you’re working on jumping, turning, pirouettes, control and rotation,” Abnett says. “Landing in interesting positions and transferring your weight as you move into the next step – all of that would apply to situations like that.”

Injury prevention is another benefit. While ballet can’t help stop the collisions that come with sports such as rugby and soccer, its muscle development can reduce the risk of any overuse injuries.

One study compared basketballers, prone to ACL problems, and ballet dancers. Even though dancers would land at more difficult angles, their training meant they suffered far fewer ACL injuries.

It helps explain why 34-year-old Cavani is so praised for his work rate and boasts a fitness that surpasses his younger colleagues.

“Cavani’s movements have always been sharp but at his age and with the physical demands of the Premier League, it’s impressive,” one fan tells The Irish Times. “Cavani’s spatial awareness and manoeuvrings are so incredible, it has me wishing he’d make ballet a thing in the United dressingroom too,” another admits.

His ballet work will have contributed to physicality. With the Premier Injuries database recording a whopping 133 muscle injuries in the first nine top-flight match days alone this season, more clubs may be eyeing up the use of ballet.

As well as the physical benefits, mainstream sports stars are entering the ballet studio to improve mentality and actively combat stereotypes.

When speaking of his Wigan Warriors youth team, Goulding believes that “people only grow when they are outside of their comfort zone”.

“As you can imagine, the idea of these physical rugby lads from tough working-class areas is a total contrast from ballet and how graceful it is.

“From the first session there was a lot of embarrassment – it wasn’t a comfortable situation for the lads.

“They grew a lot of respect, even from just trying the basics. They came back really sore and couldn’t believe some of the muscle they used.”

Similarly, it was when Uruguay’s culture minister contacted Cavani personally to explain that many boys leave dance before the age of 10 due to peer pressure that the striker’s journey into the ballet world began.

Giovanna Martinatto was BNS’ main dancer between 2010 and 2017 and praised the company for reaching out to Cavani.

“I think BNS are spot on in getting a soccer idol like Cavani on board,” she says. “Little by little, as a society, we’re realising stereotypes are wrong.”

Tristan Simpson, a ballet apprentice at Stuttgart Ballet, is also a YouTuber who uses his platform to combat ballet stereotypes.

“Ballet is one of the most demanding things in the world,” he says. “It requires not only all your physical strength but all your mental strength too.

“Ballet is so easily dismissed due to a lack of information in society. I was bullied all the time in school for it. I don’t get bullied anymore, but people still don’t realise ballet is not just a hobby, it’s a profession.

“I hope athletes with huge platforms speak up about their ballet training. It will make people more interested in ballet and give it fairer representation in the media.”

Stars like Cavani, George and Aldcroft are doing just that and holes in those ballet stereotypes are, little by little, being chipped away. Once they are broken down, a new world of training activities may open up for mainstream sports.

You never know . . . next week you might see Jamie Vardy and Harry Kane pirouetting into training. Then, the week after, they might be springing across the box just as Cavani did on that memorable day in November.