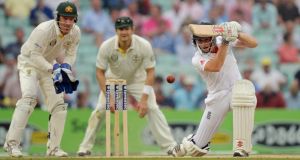 Australia chiselled out four key England wickets to take control of the fifth and final Ashes test on a slow third day at the Oval on Friday.

The hosts, replying to Australia’s 492 for nine declared, adopted an ultra-cautious approach and lost Alastair Cook for 25, Joe Root (68), Jonathan Trott (40) and Kevin Pietersen (50) on the way to 247 for four.

Although rain is forecast for Saturday, Australia are in a strong position to claim a consolation victory and English hopes of winning a home Ashes series 4-0 for the first time look to be over.

Ian Bell was unbeaten on 29 and Chris Woakes on 15 at the close with England still trailing the touring side by 245 runs and needing another 46 to avoid the follow-on.

Cook and Root, resuming on 32 for no wicket, batted carefully through the first hour under clear blue skies against tidy but largely unthreatening fast bowling. Root produced two neat wristy flicks to the mid-wicket boundary and Cook drove Ryan Harris square for four but runs were scarce.

The pair had taken their opening partnership to 68, England’s best of the series, when Cook nibbled at a wide ball from Harris just after the drinks break and wicketkeeper Brad Haddin took a diving catch.

His dismissal sent Root into his shell. The 22-year-old failed to score a run off 19 balls in a row but he pulled Peter Siddle for a single just before lunch to reach his half-century, from 145 deliveries and including eight fours.

It was a welcome return to form for Root, who has struggled with the bat since making 180 in the second test at Lord’s, and England took lunch on 97 for one.

Root hit two fours in James Faulkner’s first over of the day but with a century firmly in his sights he swept at a full-length ball from off-spinner Nathan Lyon and top-edged a simple catch to Shane Watson at short fine-leg.

“It’s not easy out there, it’s quite slow and I think we played some good cricket,” Root told the BBC. “We are going to have to work hard again tomorrow and for the rest of the game to keep ourselves in the game. You have to give credit to Australia, they bowled well and we had to work really hard for the runs we got.

“I enjoy batting with Cookie but it’s disappointing that it was the first time we have put on 50 together. We have to improve on that.”

Pietersen got off the mark by driving Mitchell Starc for four through mid-off but the normally dynamic right-hander also struggled to find his touch.

Trott’s first boundary came off the 78th delivery he faced and Pietersen’s frustration was evident when, on 11, he attempted a suicidal quick single and was well short of safety when David Warner’s throw narrowly missed the stumps.

Lyon, bowling round the wicket to imaginative field settings, extracted some turn which troubled both batsmen but they picked off easy singles to keep the scoreboard ticking over.

Australia took the second new ball just before tea and Starc trapped Trott lbw with his first delivery, the batsman failing to get the decision overturned on review.

Pietersen and Bell continued to play risk-free cricket in murky conditions and the former flicked Faulkner to the fine-leg boundary for his fourth four to get to his fifty.

But he fell with the total on 217, tempted by a wide full-length delivery from Starc and edging a straightforward catch to Watson at first slip.

Woakes drove his first ball in test cricket sweetly through the covers for four and he looked assured at the crease on his debut.

Bell continued the sublime form which has brought him three centuries in the series, unleashing a couple of trademark drives through the covers in fading light before shutting up shop again in the closing overs of the day.