‘I think about it every single day. I do, from time to time, think I am lucky to be here’ 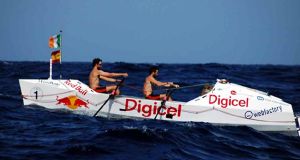 Rowers Gearoid Towey and Ciarán Lewis in their Atlantic Challenge craft before the dramatic capsize in 2006. 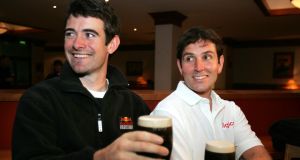 Gearoid Towey (left) and Ciarán Lewis on their arrival back in Dublin after the Atlantic Challenge race. Photograph: Eric Luke

Exactly 10 years ago, Gearóid Towey was well known in rowing but not in the wider community. Within weeks he would become front page news.

Towey and Ciarán Lewis, competing in the Atlantic Rowing Race, capsized on January 8th, 2006. They clung to life on a life raft in stormy seas before being rescued by a Spanish supertanker.

Towey now lives in Sydney, Australia and is becoming known for his involvement with Crossing the Line Sports, a transnational non-profit organisation he has formed to help retired professional sports people who have problems adapting to what he calls “real life”.

“I look back on the Atlantic stuff, and I think: exceptional thing to do, we were very happy out there, we did well, we got capsized by something that was completely outside our control, but I do have a lot of fond memories from it. But at the same time, I have a lot of memories of how we, you know, we shouldn’t be here.

Clinging to the life raft and unsure of whether their Epirb beacon was being picked up, they knew they were in real peril. “We did accept in our own ways that we were possibly going to die. It is an interesting head space to be in, I think. A humbling one.”

For Towey, the courses they did to satisfy the organisers of the race were life savers. “It’s always in the back of your mind that you might have to get yourself out of trouble. I think preparation was definitely what saved us in the end.”

For years he didn’t talk to anyone in a professional capacity about the Atlantic experience. “I guess the nature of what I was doing at the time and the nature of who I was as a person was just to up sticks and keep going.”

Towey was an elite athlete for over a decade: in 1997 he won gold at the Nations Cup, the world under-23 championships, and as a senior athlete there were three Olympic Games (2000, 2004 and 2008) and World Championship medals in 1999, 2001, 2003 and 2006. He thinks often of what a wonderful group of rowers he was part of in those years. But he also knows that the life of a professional sportsperson is dangerously artificial. For many, retirement means crashing and burning.

There are harrowing stories on crossingthelinesport.com, and Towey describes the non-profit he has set up as “a support service for athletes who are in retirement”.

“Lots of people suffered in silence and lots of people didn’t make it out. Athletes by nature are extreme personalities, a lot of them, and there is not a culture of talking about things in the athletic world.”

His own childhood was not a problem area, but troubles can be masked by success. “Sport is a brilliant self-medicator. So if you’ve had problems in your childhood, sport is a place where you can get self-medication. You are validated in the world. You completely identify with being a sportsperson. Your problems from your childhood or whatever get completely swept under the carpet.

“But when the time comes for retirement, your problems just resurface, having been medicated but not dealt with. You are at the same time dealing with the question ‘who am I and what am I going to do with the rest of my life’,”

Many sports people end their careers and might as well be going to Mongolia. “Life is so different, but a lot of them haven’t done the preparation. They haven’t even thought about it.”

As with surviving a capsize, preparation is all.