Another famous day for Ireland and Phil Simmons 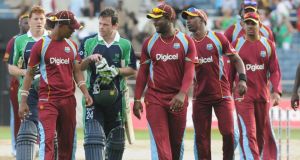 Coach Phil Simmons could be excused wearing a wider smile than normal as he watched his present side beat his former one on another famous day for Irish cricket at Sabina Park in Kingston on Wednesday.

The tour of the Caribbean had been far from a roaring success up to the squad’s arrival in Jamaica, but just 25 days out from their first game of the World Twenty20 finals in Bangladesh, Ireland proved comfortable six-wicket winners over the defending world champions.

Seven years on from the World Cup victory over Pakistan on the same ground, Simmons knows that comfortably beating a side jam-packed with T20 stars such as Chris Gayle and Sunil Narine is the perfect kick-start to their vital opening game against Zimbabwe on St Patrick’s Day in Sylhet.

“It’s a big victory, because we are in the West Indies’ home town,” admitted Simmons of Ireland’s first away victory over a full member country. “And to beat the world champions, it’s something that’s going to give us a lot of confidence going into the tournament in March.”

Sluggish pitch
Ireland’s bowlers took advantage of a sluggish pitch and a West Indies batting line-up that displayed similar characteristics, with a number of their players having just returned from injury lay-offs. Five of the six bowlers used picked up wickets, with Tim Murtagh, Alex Cusack and Kevin O’Brien bagging two apiece as the Windies were restricted to 116 for eight from their 20 overs.

The pair added 58 for the fourth wicket, before Kevin O’Brien joined Joyce to yet again help see Ireland home at Sabina Park. The hard-hitting O’Brien finished 15 not out from 12 balls, the winning runs coming off an inside edge off the first ball of the final over seven years on from being at the far end of the pitch when Trent Johnston hit the winning six against Pakistan.

Ireland will look to complete a first series win over a full member country when the two sides meet in the second T20 game at Sabina Park on Friday (7pm Irish time).

Meanwhile, Cricket Ireland won the ‘best cricket promotion and marketing campaign’ award as part of the International Cricket Council’s cricket development programme for the Ireland versus England one-day international at Malahide last September, a game that attracted a sell-out crowd of 10,000 supporters.