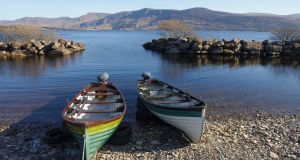 Lough Currane in Waterville, Co Kerry again obliged with the first official wild Atlantic salmon from an open fishery for 2019. Local angler Michael O’Dwyer was the pride of the town and indeed, the country, with his silver beauty of 4.5kg (10lb) caught while trolling on the lake.

Later, in the Waterville Inn, landlord Damian Duff was ready to present the Paddy Carey Memorial Cup to Michael, leaving plenty of time for celebrations.

Back in 2016, Currane angling guide Neil O’Shea took the honours with the first salmon of the season on Monday, 18th January. His fresh fish also weighed 4.5kg (10lb) and caught while trolling a Rapala lure from ‘the Bridge’ beat on the eastern side of the lough.

It was the first occasion for Currane to record the first salmon of the new year in Ireland.

Minister for the Marine, Michael Creed has secured approval at EU and international level for the introduction of a science based catch, tag and release fishery for blue fin tuna (BFT) for Irish recreational anglers. The scheme will complement the work on satellite tagging currently being undertaken by the Marine Institute.

This new management plan was adopted at the 2018 International Commission for the Conservation of Atlantic Tunas (ICCAT) Annual Meeting.

Previously, under ICCAT rules, Ireland could not allow targeted angling for BFT as we do not have a quota. The changes secured will now allow targeting for tagging purposes only by recreational anglers.

The exact details of the pilot scheme will be developed over the coming period in consultation with the Department of Communications, Climate Action and Environment, which is responsible for angling.

Minister Creed, said: “My department is currently working with the Marine Institute and the Sea Fisheries Protection Authority on a pilot project that will allow up to 15 angling vessels with trained tagging operators to target BFT in 2019.

The aim of the project is to build on work undertaken to date and to increase our knowledge of the behaviour and abundance of BFT in the waters off the Irish coast. It will also provide support for angling tourism in peripheral coastal communities, including, in particular, Donegal.”

At Ballina District Court, Co Tipperary last Tuesday, Inland Fisheries Ireland (IFI) prosecuted Irish Water for the discharge of a harmful substance into the Ballycorrigan River in May of last year, causing a fish kill. Among the mortalities were 100 brown trout, three juvenile salmon and one stone loach.

Judge Patrick Durcan heard evidence from a senior fisheries officer that the fish kill was caused by a combination of effluents arising from an uncontrolled maintenance event from the Irish Water Ballina/Killaloe Wastewater Treatment plant. The judge directed Irish Water to pay IFI’s legal costs of €2,290 and imposed a fine of €2,500.

IFI’s Amanda Mooney, said: “Irish Water co-operated fully with the investigation and updated its cleaning protocols for the use of chemicals in treatment plants nationwide with more appropriate methods now in use as a direct result of this incident.”

Don’t forget to visit Ireland’s Angling Show this weekend in Swords Expo Centre. A great weekend is guaranteed for all the family with something for everyone. Highlights will include casting pool demonstrations, lure demo tank, boat displays and theatre talks, while exhibiting companies cover all aspects of angling.

The new Family Zone will include a fishing simulator free for kids to experience the thrill of a big catch. Watch out also for the sea kayaks and boats to suit all budgets.