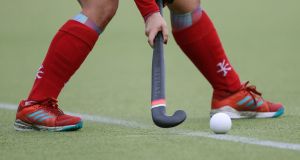 The Irish men’s hockey team travel to Oslo for the EuroHockey Indoor Club Challenge I this weekend. Photograph: Oisin Keniry/Inpho

Three Rock Rovers are going deep underground for their latest European adventure as they travel to Oslo for the EuroHockey Indoor Club Challenge I this weekend.

The Kringsja club venue is “like going into a World War II bunker”, according to coach Liam Canning who is leading the club into their sixth European indoor campaign in a decade.

His side have experience of the Norwegian venue already from December 2017 when they played a challenge tournament there, giving them some sense of what lies ahead.

“The venue is about 100 metres underground with two pitches behind a giant metalic door on rollers,” Canning said. “Once you go in, you are in artificial light for the whole day.

“The surface is also slower and stickier than the wooden ones we have played on in Ireland.”

The coach is one of the stalwarts of indoor, developing a passion for the code in the 1980s with the superb Avoca side who were one of the key clubs during indoor’s heyday in Ireland.

With Three Rock, he has managed to forge a strong unit with his son, Ross, crucial in midfield as the main passer of the ball. Jody Hosking’s dynamism is a feature while outdoor internationals Ben Walker – who has overcome an ankle injury – and Luke Madeley are quickly becoming accustomed to the game.

In Oslo, they will initially face a fancied Ukranian side OKS SHVSM Vinnitsa and Cardiff & Met on Friday before taking on Italy’s Bologna on Saturday morning in the group.

A top two finish would keep them in the running for promotion on Sunday while the bottom two in the group are destined for the relegation pool.

As for their chances, hopes are high in the squad of backing up last year’s success in the fourth tier in Georgia but Canning takes a more measured approach.

“The lads are confident, aiming for promotion two years in a row. Realistically, getting to the top four playoffs would be a tall order. We just don’t play at that level enough here in Ireland but we know we are playing for ourselves [for 2020] and so fifth or sixth will guarantee us a good level again to develop on.”