Angling Notes: Many fisheries have closed for the foreseeable future 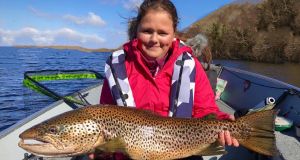 Nichola Ward with her specimen ferox trout of 14lb 8oz caught on Lough Corrib with father and guided by Tomi Kurman of Corrib Predator Team.

The “writing is on the wall” is a comment bandied about in relation to closure of all fisheries in Ireland because of the coronavirus pandemic. As of now, a nationwide lockdown cannot be ruled out, but hopefully it won’t come to that.

Of note is the recent recommendation by the Government that all golf clubs, practice facilities and courses close until April 19th, 2020.

Already numerous fisheries across the country have closed their doors for the foreseeable future to help fight the virus. Pleasure outings and competitions have virtually all gone by the board.

One of the most recent to close is Delphi Lodge in Leenane, Co Galway. While the lodge expects to reopen on April 25th, this date is subject to review.

Further afield, New Zealand’s government has given a clear intention that all fishing is prohibited during the lockdown period. Therefore, Fish & Game (New Zealand) is urging all anglers to do the right thing and stay at home during Covid-19 Alert Level 4.

Delphi Club in Abaco, Bahamas, has also bowed to the inevitable and closed until at least April 6th. While the island has, to date, not had a single case of Covid-19, the travel ban from the UK was the only option to choose.

Meanwhile, reports to hand show some anglers ventured out last week to enjoy a day’s fishing in ideal weather conditions, abiding all the while to the strict health guidelines laid down.

*There were a couple of nice salmon reported from the river Feale in Co Kerry of late including one of about 10lb for Eddie Corry from Clare, which was returned safe and well. Rocky Moran from Castlebar went one better with a cracking fish of 15lb, the first of the season for Lough Beltra, Co Mayo.

*On Sunday, March 8th, DH Angling held its first competition of the year on Lough Sheelin. The Lithuanian club specialises in spinning for trout and operates a strict catch-and-release policy.

With a membership of 34 (17 teams), there was a full turnout on the day and Sheelin did not disappoint with 44 trout over 36cm recorded, one reaching 61cm.

Specimens were collected over the past decade during monitoring surveys, mainly from within the marine protected areas. The collection will provide a valuable and readily available resource to the scientific community in Wales and beyond.