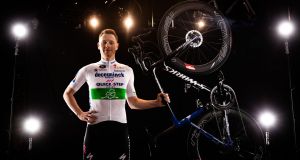 Now back training in Ireland after his usual base in Monaco and neighbouring France have been locked down, Sam Bennett has kept his eyes focussed on the Tour de France. That’s despite not knowing if the race will go ahead in July, or if it will be run off much later this year.

The 29-year-old has notched up two victories sofar this season, nabbing the opening stage of the Santos Tour Down Under and then winning the one-day Race Torquay. He’s not satisfied with that early success, though, believing he should have won more.

“I was happy with the first win I got, but I kind of had a nice little reputation of winning a stage in every stage race I went to,” he told the Irish Times. “I’ve been doing that for almost two seasons, except for the Tour of Romandie last year, where I got second. But now there are two stage races this year where I didn’t get a win. I am not happy about that at all.”

Bennett is referring to the UAE Tour, where he finished second on a stage, and to Paris-Nice, where he crashed out of the race on stage three. He’s perhaps being hard on himself, but also admits his form hasn’t yet been where he expected it to be.

“I had been in the same team for six years,” he said, referring to his previous Bora-Hansgrohe squad. “You often see with guys that it takes a little while to get going once you change teams. You could see that with [Elia]Viviani this year, you saw with Caleb [Ewan]last year.

“It is a shift, but I think I learned a lot. And I tried new training techniques where I learned a lot as well. But I was talking with my coach and we are going to go back to my old style of training. That said, I learned a bit more about sprint training that I can really use now.

“I am not happy with the start but I learned from it, and I think that is important. I can take something away from it and make myself better. That is the way I have to look at it.”

Bennett moved to the Deceuninck-QuickStep team over the winter and says that being a clear sprint favourite in a top-notch team has brought new pressures. However he is someone who tends to rise to the occasion and, having recovered from his crash in Paris-Nice, is putting in solo training rides in order to build form.

The coronavirus means that Bennett doesn’t know when he will race again; the pro peloton has been put on hold. “I want to start doing big hours in training and come back to my usual self,” he said. “But it is very hard to be ready for a date when you don’t know when that date is.

“I think last season I did it very well where I kept good form all year and then when I needed a peak, I could peak. So I am going to get myself to that good form where they do come and say, ‘okay, you are racing in three weeks or four weeks, I can be ready and hit a peak.”

With the Olympics on hold until 2021 - something he agrees with - the Tour de France has become an even more important goal for him this year. However its uncertain if the race will go ahead in July or if the crisis situation in France means that it must be deferred until much later this year.

“The Tour is my main target,” Bennett says. “I am training with that in mind. But it is hard because we are not given a set date. I am a guy who likes numbers. I go off feel as well, of course, but I am a guy who likes numbers and I like to target a specific date and be ready. Now there is so much uncertainty. But I’ll keep working hard and be ready.”

One thing helps: he’s knows that if he’s in top shape, sprint stage wins are very much a possibility. Like Sean Kelly before him, that will keep him focused as he clocks up the kilometres around Carrick-on-Suir.