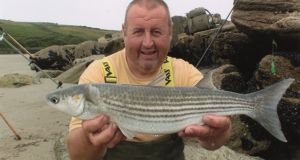 The annual report of the Irish Specimen Fish Committee (ISFC) for 2017 once again makes for splendid reading.

Founded in 1955, the report sets out to verify, record and publicise the capture of large fish caught on rod and line by anglers in Ireland, both in freshwater and marine waters.

The report provides a detailed listing relating to specimen and record fish captures. Over 29,000 claims have been received over the past 62 years. In 2017, 422 claims were processed of which 382 were ratified including one new record.

Ian Mulligan from Dublin was the lucky recipient of the new record for his capture of a golden grey mullet of 1.29kg at Rosscarbery, Co Cork in July, to pip the three-year record by .09kg (3oz).

The Dr AEJ Went award for the young specimen angler of the year went to 13-year-old Amy O’Brien from Cork, also for a golden grey mullet of .94kg at Rosscarbery.

In his annual report, chairman, Dr Robert Rosell, details a serious funding situation, which if not addressed urgently, could see the demise of the report within three years.

He goes on: “While staff time for committee work is funded by Inland Fisheries Ireland, Agri Food and Business Institute, Dept of Agri Environment and Rural Affairs (NI) and given freely by anglers, the ISFC remains on a downward trajectory of cash reserves to fund report production, award purchases, etc.

“Put straight, unless the broad collective of stakeholders provide further support now and most particularly secure ongoing arrangements, there is only a cash reserve for perhaps three years left. The online donation facility on the ISFC website facilitates fuss-free donations and the committee requests your support.”

First salmon of the season caught in Donegal

Water levels fell to more normal levels last week on the Lackagh River in Co Donegal to allow John McLaughlin catch the first salmon of the season which his dad Dermot, netted and quickly released. The fish weighed about 4.3kg (9.5lb) and opted for a Badger Tube fly from the Grilse Pool.

At a recent sitting of Bray District Court, Irish Water pleaded guilty to the discharge of deleterious matter to the River Vartry in February 2017. The offence related to the accidental discharge of lime from their water treatment facility at Roundwood, Co Wicklow.

On investigation, a fisheries environmental officer confirmed that the spill had resulted in fish mortalities downstream from the discharge. Water samples were taken and analysis confirmed that the lime spill had altered the pH in the receiving water, resulting in the death of approximately 100 fish.

Irish Water co-operated fully with the investigation and initiated an immediate clean-up of the site.

Following the clean-up, the Environmental Protection Agency completed a dye survey on the drainage network to confirm that only clean surface water was discharging to the River Vartry.

Judge Kennedy commented on the significance of the River Vartry in supporting Atlantic salmon, sea trout, brown trout and lamprey. Irish Water was fined €500 with costs and expenses of €6,937.65.

The ‘Posh Tosh’ tube fly is a pattern that can be used throughout the season. It is an excellent fly for fresh running salmon tied on doubles, trebles or singles.

To avail of the pattern, contact Jimmy Tyrrell at irishflycraft@gmail.com or 086-845 1257.

Rathmullan Charters in Co Donegal is now taking bookings for 2018. On offer are full and half-day angling charters from May for species including cod, pollack, ling, ray, tope, and blue shark from August untiltill October.

Groups of up to 10 persons can be catered for and rods and reels are available, if required. For bookings, call 087-248 0132; rathmullancharters@eircom.net or see Facebook page.