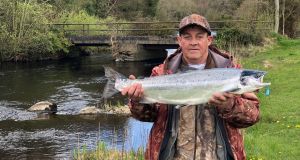 Stephen Scott with 10.5lb salmon from the Drowes River.

Anglers and the general public have noticed a very serious algae bloom in the lake which has resulted in a massive deterioration in water clarity and water quality.

This, LSTPA believe, is clear evidence of continual nutrient enrichment.

The association is deeply concerned regarding this latest setback and fear that current conditions within the water bed will have a serious negative impact and put the entire ecology of Sheelin at risk yet again.

There may also be health issues for those who use the lake as a water supply, and concerns that tourism in the area will suffer.

The LSTPA calls on the Department of Environment to set up, as a matter of urgency, a task force comprised of all relevant authorities to deal with this worsening situation; to identify the root cause of nutrient enrichment within the Sheelin catchment and to put plans in place for a long term solution to the problem.

“It is beyond belief that despite all we have experienced over a period of 40 years, we are facing this massive problem once again,” the association said. For further details, contact LSTPA at 086-884 5750.

Students had completed a very successful 12-week course which gave them an insight into the world of angling. Sponsored by Eir, the concept was the brainchild of former Eir employee, Ciarán Ward.

The programme included coarse fishing on Lough Ramor in Cavan; pike fishing in the K Club, Co Kildare; fly fishing for trout in Annamoe, Co Wicklow; an entomology session on the River Dodder and fly-tying classes.

The venture was co-hosted by Inland Fisheries Ireland (IFI) who provided invaluable assistance on the ground. In this context, IFI director Brian Beckett and fisheries inspector, Josie Mahon attended the prizegiving.

The Drowes River fished well over the past week with 24 salmon caught, some into double figures and grilse. On Tuesday, Julian Ciconte recorded a 12lb fish on a Flying ‘C’ lure from the Grazings, having hooked and lost a fish estimated at 18lb plus! On Wednesday, Stephen Scott (main photo above) landed one of 10.5lb on prawn from the Washstones.

Irish Countrysports and Country Life magazine and the Great Game Fairs of Ireland are looking for a talented young Irish country sports writer-of-the-year to share their love of country sports and the countryside.

Entrants must be under 15 and entries, in about 600 words, should focus on one day in particular – at the river or in the field – which was simply the best fun ever!

The winning story will be published in Irish Country Sports & Country Life and the writer will get two modern country classic books specially selected to encourage their writing skills.

Also included is a day’s fishing at Birchwood Fishery, Omagh; a year’s subscription to the magazine and a family ticket to the Irish Game Fair at Shanes Castle, Antrim.

Hot off the press comes news that the winner will also receive a year’s membership of Countryside Alliance Ireland.

Magazine publisher Albert Titterington, said: “So, young writers everywhere, let’s get cracking as it’s an amazing opportunity for budding writers. All you need to do is send your story and a couple of photographs along with your contact details no later than May 21st to countrysportsandcountrylife@btinternet.com. And don’t forget, all applicants must have permission from their parent or guardian to enter the competition.”

Following concerns raised by stakeholders on trawling within the six nautical mile coastal zone, a public consultation was launched last week by the Minister for the Marine, Michael Creed.

The topic is the subject of scientific and economic reports by the Marine Institute and Bord Iascaigh Mhara, and preliminary engagement with fisheries representative groups.

The paper entitled ‘Trawling Activity inside the 6 Nautical Mile Zone’, along with referenced reports and analysis, is available on the department’s website at www.agriculture.gov.ie/customerservice/publicconsultations. Consultation period will run until Monday, 11th June, 2018.

Farlows Travel new brochure is out now to fishing destinations across the globe. If you would like a hard copy, email info@farlowstravel.com or write to Farlows Travel, 9 Pall Mall, London SW1Y 5NP.

The French Partridge Mayfly is a wet mayfly pattern with an orange hackle to give it that extra attraction. Stripped back through the water the fly pulses nicely to give a realistic movement.

Contact fly-tyer Jimmy Tyrrell at irishflycraft@gmail.com or 086-845 1257 to avail of the pattern.