In-form students face Loreto in semi-finals, who have tested them most this season 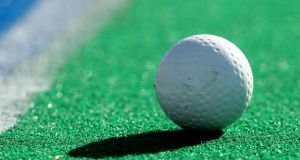 Loreto have proved difficult for UCD this year in the league despite finishing 22 points ahead of them. Photograph: James Crombie/Inpho

So, can anyone stop UCD? With the Irish Senior Cup and Irish Hockey League title safely wrapped up, the students will be targeting a clean sweep of the season’s major honours at Grange Road this weekend, the Champions Trophy all they need to complete their 2017-18 collection.

Standing between them and that achievement are Loreto, their semi-final opponents on Saturday and, should they make their way through to Sunday’s final, the winners of the meeting between Pegasus and Cork Harlequins.

Having finished 22 points ahead of Loreto in the IHL, reaching the final might look like an easy enough task for UCD, but in two of their three games this season Loreto pushed them closer than most. It took a late Katie Mullan goal to decide their IHL fixture back in February, and their ISC semi-final last month ended in a scoreless draw, UCD eventually prevailing in a shoot-out.

Loreto, then, will take encouragement from those performances, as well as an outstanding late IHL unbeaten streak that saw them pip Railway Union to a place in the Champions Trophy. They lost 2-0 to UCD in last year’s semi-finals, but they’ve reason to be hopeful this time around, not least because of the form of teenage Irish international Sarah Torrans, a prolific goalscorer this season.

While focusing on each other, Pegasus and Harlequins will be keeping their fingers crossed for a UCD victory in the other semi-final – the students have already qualified for Europe next season through the ISC, leaving the second berth available to the Champions Trophy finalists, even if they were to lose to the reigning champions.

Harlequins have had the slight upper hand on the Belfast side this season, drawing with them in Cork in the IHL back in October, but beating them 2-1 at Queens in February. They also have the distinction of being the only team to beat UCD in national competitions this season, winning 2-1 at Belfield on the opening weekend of the IHL back in September.

If IHL form is any guide, then, it will be a UCD v Harlequins final on Sunday, but Loreto and Pegasus will be hell-bent on throwing a spanner in those particular works.