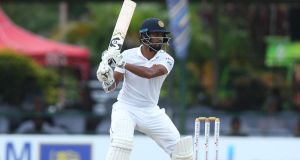 Angelo Mathews hit a century for Sri Lanka on the first day of the second Test against England. Photo: Buddhika Weerasinghe/Getty Images

The opening day of the second Test in Galle was an absorbing arm-wrestle for control and one in which experience very much came to the fore. Jimmy Anderson claimed three wickets on his England return but it was an unbeaten 107 from Angelo Mathews that left Sri Lanka the happier at stumps.

When the imposing Mathews strode out to the middle in the fifth over of the morning session his side were a perilous seven for two. Anderson had hit the ground running after five months between appearances and there were genuine fears the hosts could be about to repeat the mistakes witnessed during the first innings blowout last week.

But over the course of three sessions in the heat the 33-year-old held firm, repelling England’s attack leader – immaculate with figures of three for 24 from 19 overs – and two bursts of challenging reverse swing from Mark Wood to compile his 11th Test century and take Sri Lanka to 229 for four with three overs unbowled.

A day such as this was not entirely unexpected when Dinesh Chandimal, still deputising for the injured Dimuth Karunaratne, won the toss and elected to bat. It looked a more traditional Galle surface this time: a harder, truer strip on which the spinners would likely be forced to wait two or three days for the ball to really start playing tricks.

That said, it still required Sri Lanka to overcome an early wobble as Anderson returned for a first outing since claiming his 600th Test wicket in August – replacing Stuart Broad in the XI as part of England’s rotation plan for the experienced pair – and wasted little time in adding two more to his record-breaking tally.

Kusal Perera was first to fall. The left-hander had survived a tight lbw shout from Sam Curran’s second ball thanks to umpire’s call on review but, instead of making this count, he somewhat self-immolated for the third time in the series as a wild attempt to larrup Anderson over long-on gifted a Joe Root a simple catch at first slip.

Out strode the recalled Oshada Fernando under an azure sky. But much like Kusal Mendis, the No 3 he replaced after four ducks in five innings, the right-hander failed to get off the mark, falling fourth ball to an inside edge that cannoned into the stumps as Anderson extracted a touch of bounce from the pitch.

From there the hosts rebuilt, Lahiru Thirammane combining with the newly arrived Mathews for a stand of 69 that went through to lunch and during which the left-hander’s form rolled on from his 111 in Sri Lanka’s second-innings fightback last week.

The break in play seemingly affected Thirammane’s concentration, however, and two balls after the interval he was gone for 43. It was Anderson once again here, going around the wicket, presenting a typically perfect upright seam and extracting a smidgeon of movement from the breeze that teased a loose edge behind to Jos Buttler.

Thereafter Mathews and Chandimal settled in, swapping helmets for caps when facing the spinners and steering their side to a healthy 193 for three by the 69th over. Neither Dom Bess nor Jack Leach offered Root much threat – the former at least kept things tight – and after Anderson’s second spell was done Wood looked likeliest to strike.

Chandimal will testify to this, surviving a five-over burst in the afternoon en route to his half-century. Wood hit 94.4mph on the speed gun, testing the right-hander’s defence with reverse swing and his courage with some short balls. One nasty bouncer struck Chandimal on the grille, while another left him nursing a sore thumb.

Wood looked utterly spent at the end of this, hobbling back into the pavilion with an ice pack around his neck and his face flush. But he returned in herculean fashion for an eight-over spell during the evening session and finally got some reward when the old ball swung into Chandimal’s pads on 52 for a precious breakthrough.

Whether Root was wise to push Wood so hard so soon in the match remains to be seen. The 31-year-old does at least have a period of rest at home coming up, with Jofra Archer returning for the start of the India tour, but this was still a big ask for a fast bowler in such extreme heat.

It did not quite pay off either, with the last five overs of this elongated spell failing to produce another wicket before the second new ball, as Mathews chugged along to his century in 208 balls and found an ally through to stumps in Niroshan Dickwella.

This was a fine knock by Mathews overall and somewhat surprisingly his first hundred in Galle. The right-hander put a high price on his wicket and used all of his 88 caps of experience when punishing anything loose, with one flamingo flick through midwicket off Curran the pick of his 11 fours.

It was also reward for some hard graft off the field. Mathews sat out Sri Lanka’s recent defeat in South Africa through injury and had been ordered to sharpen up his fitness more generally by their head coach, Mickey Arthur. This series he has looked lean in body and, like the evergreen Anderson, seemingly hungry for more success. – Guardian