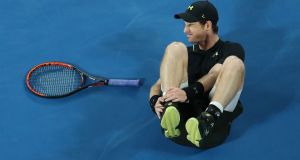 Andy Murray holds his ankle after he fell over in his second round match against Andrey Rublev of Russia on day three of the 2017 Australian Open. Photo: Scott Barbour/Getty Images

Andy Murray sometimes struggles to hit a convincing rhythm early in grand slam tournaments but, after a hesitant start on Monday, he goes into the third round against Sam Querrey on Friday looking as dominant as he did when stringing together 28 wins in a row on his rise to No1 in the world.

He made the most of a heaven-sent opportunity against the little-known Russian teenager, world No156 Andrey Rublev, to win 6-3, 6-0, 6-2, with a slight chill lurking in the cloudless night skies after a couple of days of killing heat.

Murray advances in a tournament he loves but has yet to conquer in five losing finals with an imperious dismissal of an opponent who did not look old enough to be out this late unaccompanied, but whose reputation for pugnacity preceded him. Fernando Verdasco, the friendly Spaniard, is among those who have been irritated in a match by the brashness of Rublev, who has sparred under the tutelage of his father, a respected amateur boxer in the old Soviet Union.

Murray, a keen student of pugilism, had not heard of the father, but, as he does for every match, acquainted himself with the strengths and weakness of his opponent, the son, and duly dismantled his game in a little over an hour-and-a-half in Rod Laver Arena.

He crumpled behind the baseline on his right ankle in the third game of the third set and had the trainer on to check for damage, of which there appeared to be little. His serving percentages were respectable and he did not give Rublev a break opportunity all night, which gave the match something of an exhibition feel.

Serving for the match, Murray graciously offered to replay the first point after movement behind him in the crowd; that’s the way knights of the realm roll. Rublev appreciated the gesture and finished with a bit of a flourish to force deuce but shoved his last backhand long.

“There’s something about this kid that people gravitate to,” John McEnroe observed of Rublev. He is usually right. We will hear more of him, hopefully without a sub-text of aggression. He was charming throughout on Wednesday evening, and appreciated the reception on his departure.

Murray said courtside of his fall, “It’s just a little bit sore, not too serious. Rolled it a little bit, will get some ice on it tonight. I can put weight on it, so I’m sure it will be fine.”

So, he is in prime shape, physically fresh and mentally alert, ahead of the tougher challenges ahead. He faces Querrey next, whose most recent favour to the Scot was beating Novak Djokovic in the first week of Wimbledon, clearing the way for his second title there and contributing significantly to the minor crash of the Serb’s tennis for the rest of the season, which also facilitated Murray’s rise to the top of the rankings.

It would be premature and disrespectful to suggest another enforced lay-off is imminent for Roger Federer, but, going on his stiff movement towards the end of his three-set win over world No200 Noah Rubin, it is fair to say the prospects of the four-time champion reaching the second week of the 2017 Australian Open are not great.

“I’ve played out here many, many times,” the 35-year-old Swiss said courtside after beating the US Open boys champion 7-5, 6-3, 7-6 (7-3) in his second Tour match after a six-month break to recover from knee surgery. “But he’s been around a couple of years and I’ve seen a little bit of him. I think my serve got me out of trouble today.

“I wasn’t feeling as good as in the beginning, that’s for sure. I got lucky in the third set, but it was good to fight through. There were a lot of difficult moments out there and that’s what I need to progress in this tournament.”

Federer has always reached at least the third round, and this was his 82nd win in Melbourne in 95 matches. He next plays Tomáš Berdych on Friday.

“It’s not an easy draw,” said Federer. “He [BERDYCH]has beaten me in New York, at Wimbledon and at the Olympics. He’s a great player, I like Tomáš’s game and I’m sure it’s going to be another tough one.”

In the third set on Wednesday, the American, 15 years Federer’s junior and playing with the wide-eyed freedom of youth, spotted a growing uncertainty in his opponent’s sideways movement on the forehand side and broke for 4-2. But Federer served his way out of trouble in the eighth game and, going for high-risk winners in nearly every exchange (which has long been his forte, obviously, but usually out of choice rather than necessity), he broke back when Rubin served nervously for the set, then levelled for 5-all.

A mix of desperation and an urgent desire to get the job done in three sets had lifted him above the fatigue that seemed to be invading his legs after just under two hours on a mild afternoon. Although his first-round win over Jürgen Melzer went four sets, that match lasted only a little over two hours, so this was not the most exacting return to tennis.

Federer told Lleyton Hewitt at a pre-tournament function, “I won’t know how my body holds up at least until Indian Wells and Miami [which are in March].” On day three, after a total of little more than four hours of tennis in the first week, it wasn’t holding up that well.