Murray made to work while Federer makes winning comeback 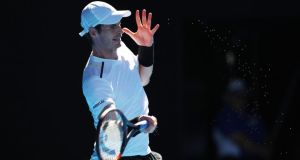 Andy Murray of Britain plays a forehand in his first round match against Illya Marchenko of the Ukraine on day one of the 2017 Australian Open at Melbourne Park. Photo: Clive Brunskill/Getty Images

Andy Murray was relieved rather than elated to come through a ragged opening match in his 12th Australian Open campaign, beating the determined Ukrainian Illya Marchenko 7-5, 7-6 (7-5), 6-2 on a sweltering afternoon.

It took him two hours and 47 minutes to subdue a player ranked 95 places below him and whom he had defeated for the loss of seven games in under two hours in their only previous meeting, in the second round six years ago. That was before Murray, who had peaked at No2 in the world a year earlier, had won the first of his three slams. He arrives this time as world No1, finally, and with ambitions to end his run of five losing finals, four of them against the player he deposed at the top of the rankings, Novak Djokovic.

The host channel interviewer at courtside, John Alexander, wondered what the newly knighted Murray wanted to be called. “Andy,” he said, as he has done when repeatedly asked the same question. “I’m very sure. I don’t know when the investiture is. Whatever works for the schedule.”

All that might change, he joked, was that his wife, Kim, might tone down her courtside enthusiasm, which reached fever pitch in his match against Tomáš Berdych two years ago. “No more swearing for Kim in my matches, I suppose,” he said.

Of his ascent to the summit, he said, “The last three or four months were tough, physically and mentally, but great at the same time. The ranking doesn’t change anything. I’ve lost here a few times. I’m hoping to go one better this time.”

The most uplifting result of the day arrived a little earlier on Show Court 3, where Alex De Minaur, the 17-year-old Australian who has everyone wondering if he can go all the way in the game, shocked Gerald Melzer 5-7, 6-3, 2-6, 7-6, 6-1.

“Words can’t describe how I’m feeling right now,” the shy teenager said. “Definitely the happiest moment of my life.” Last week De Minaur beat the former world No18, Benoit Pairre. Melzer was as good a scalp, having taken Murray to a first-set tie-break in Doha earlier this month.

Asked how he felt being described as Australia’s brightest young prospect, he said, “I’m just happy playing tennis. I don’t want to put a lot of pressure on myself. I’m happy playing match by match, point by point. We’ll see where the journey takes me.”

In the short term, it takes him into a second-round match with Sam Querrey – who brought Djokovic’s world tumbling down at Wimbledon last year and on Monday took four sets to beat the Frenchman Quentin Halys. If De Minaur were to conjure another minor miracle, he would almost certainly be sharing a stage on Wednesday with the player who ended the Serb’s long reign as No1.

Murray started his match in Rod Laver Arena with three double faults in the first four minutes to gift Marchenko a surprise lead, but consecutive aces to hold in the third game briefly settled his nerves. It was a dire start all round and it wasn’t until Marchenko produced a delicately chipped half volley in the seventh game that the slumbering audience had much to enthuse about.

Serving for the set, Murray switched off long enough to let Marchenko brighten up a dull match on a blindingly sunny day with a hard-struck forehand down the line, and the Ukrainian aced for 5-all. A stroll had become a yomp.

But the squandering continued apace in the second set, Murray letting Marchenko slip away to a 3-1 lead. On the changeover, he was agitated in his seat, muttering, “shocking movement, shocking movement”.

There were further distractions, as Murray motioned a security guard to move away from his team box. When he beat Marchenko here in 2011, it was a horde of giant bugs that put him off his game. What bugged him on Monday was the tennis of Marchenko.

After battling back to 5-5, Murray handed him his fifth break point before holding with a sublime lob. He lifted his level in the tie-break, then powered on to win the third set.

Earlier, the British men’s contingent was cut by a third when Aljaz Bedene fell to the stubborn Victor Estrella Burgos in four sets of varying quality and serial frustration. The Dominican Republic veteran, the fourth oldest player in the draw at 36 behind Tommy Haas, Radek Stepanek and Ivo Karlovic, spotted Bedene nine years but recovered brilliantly from a third-set bagel to win 7-6 (9-7), 7-5, 0-6, 6-3.

Bedene, who spent an inordinately long time afterwards being drug-tested on a drainingly warm day before coming to his press conference, said he had not long ago considered quitting tennis altogether, at just 27, because his long legal battle to play Davis Cup for Great Britain ended in failure last March.

“After the ITF hearing in Dallas and getting the negative reply, everything just dropped for me really,” he said. “I took long holidays before the US Open; usually players don’t do that but I needed it. I needed to forget tennis. There were moments where I didn’t think I would play tennis again because I really wasn’t enjoying it.

“I was just not feeling great on the court and I thought, ‘What’s the point if you’re not enjoying it?’ I decided, if I’m going to play tennis I want to enjoy it. One of the things is I don’t want to focus on Davis Cup any more. It takes too much out of me.

Not, however, on Monday.

Roger Federer’s long-awaited return from injury could hardly have gone better as the 17-time grand slam champion beat Austria’s Jürgen Melzer. Federer had not played a competitive match in more than six months and while there were certainly signs of rust on Rod Laver Arena, the 35-year-old Swiss emerged unscathed with a 7-5, 3-6, 6-2, 6-2 victory. It remains to be seen how Federer’s form, and fitness, reacts to tougher opponents but there should be some leeway too in the second round, where he now faces the American qualifier Noah Rubin.

Federer played at the Hopman Cup, an exhibition event in Perth, earlier this month but this was his first official match since Wimbledon last year, after which he chose to sit out the rest of 2016 in a bid to overcome niggling injuries to his left knee and back.

“It was nice to be playing tennis again on a centre court like this, I couldn’t be happier to be here now,” Federer after his first-round victory. “It’s been a long road but I’m in the draw which is a beautiful thing. First rounds are never easy so I’m happy to live another day. Any match is a good match. Even if I had lost today it would have been good because I’m back on the court.”

The 2014 Australian Open champion, Stan Wawrinka, flirted with an early exit when trailing in the fifth set before seeing off the stout challenge of the world No35, Martin Klizan, and left an impression on his opponent as well as the enthralled crowd in the Margaret Court Arena.

At four-all in the fifth set, Wawrinka, who was serving and struggling, slammed a smash directly at Klizan, striking him in the groin and the Slovak left-hander sunk slowly to his knees. The Swiss stepped over the net to commiserate, Klizan accepted his sympathies, and on they went to the final bell. Wawrinka held, and Klizan served to stay in the match.

At the business end of a keenly contested encounter, Wawrinka found another gear. He was 25-19 in career five-setters, Klizan 4-7, but there was still not a lot in it in the match that mattered. A classic single-handed Wawrinka backhand gave him match point, kissing the line. Klizan, clearly dispirited, dumped a forehand and it was done.

Shane Lowry the star turn as Irish Open gets underway, Arsenal see off Leicester 07:51
Irish Open 2020: Galgorm Castle hole-by-hole guide 06:00
Rugby Stats: Saracens superiority at scrum time key to victory over Leinster 06:00
Irish Open 2020: Four players to watch out for 07:01
Marty McGrath and Ederney hoping to bridge a long gap in Fermanagh 06:00
Here is your handy guide to sport on television this week