‘THE RING Magazine, that’s the one’ - Carl Frampton named Fighter of the Year

The Belfast-born fighter is the first Irishman to win the award, and only the fifth European 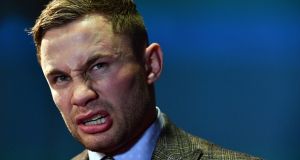 Carl Frampton has been named THE RING Magazine Fighter of the Year for 2016 after becoming a two-weight world champion.

Frampton beat the previously unbeaten Scott Quigg at the Manchester Arena on February 27th, winning on a split decision and breaking his opponent’s jaw in the process.

Then, after unifying the two junior featherweight sanctioning-body titles with that victory, he stepped up a division and beat Leo Santa Cruz in a majority decision, taking the featherweight title in the process.

The 29-year-old agreed to an immediate rematch with Santa Cruz, which is set for January 28th in Las Vegas.

“Obviously it’s a huge honour,” Frampton told THE RING magazine. “Toward the end of the year I picked up fighter of the year on some websites but THE RING Magazine, that’s the one. I’ve very, very proud of that.

“I had an amazing year last year, I unified at 122 and moved up and fought a great fighter at featherweight in Leo Santa Cruz. The year went pretty much to plan. It couldn’t have went better.”

The prestigious magazine also explained their decision; “So the final tally: Two fights against two elite, previously unbeaten opponents in hostile territory, two victories. No other fighter had that kind of year.”

Last year Tyson Fury won the award while Ricky Hatton won it in 2005.

The publication has been selecting a Fighter of the Year since the 1920s, with other previous winners including the likes of Sugar Ray Robinson, Floyd Patterson, Muhammad Ali, Joe Frazier, George Foreman, Mike Tyson and Floyd Mayweather Jr.

Meanwhile Fight Of The Year for 2016 went to Francisco Vargas and Orlando Salido for their Super Featherweight draw last June. Knockout Of The Year went to Canelo Alvarez in his bout against Amir Khan. Event Of The Year was the death of six time Fighter of the Year Muhammad Ali.

While Most Inspirational went to Bernard Hopkins, who last year returned to the ring one month shy of his 52nd birthday.