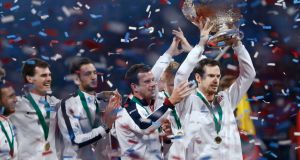 Andy Murray pulled off arguably the most impressive feat of his career by beating David Goffin to clinch the Davis Cup.

Britain’s first title since 1936 was secured when Murray completed a 6-3 7-5 6-3 victory over the Belgian number one at the Flanders Expo in Ghent.

When the final lob landed in, Murray fell to the clay and covered his face with his hands before being mobbed by captain Leon Smith and his team-mates.

It was entirely fitting, and somewhat inevitable, that it should be Murray that secured the winning point after one of the most remarkable seasons in the competition’s 115-year history.

Of the 12 points Britain needed to claim the title, Murray won 11 of them, eight in singles and three in doubles with brother Jamie, with James Ward the only player not a member of the Murray family to contribute.

Three other players have won 11 rubbers in a season since the current format was introduced in 1981 but Murray is the first to do so all in live rubbers and remain unbeaten.

The atmosphere was the loudest it has been all weekend as the curtain dropped for a final time to reveal the teams.

Murray has played in grand slam and Olympic finals but nothing quite like this and the court must have felt like a cauldron of noise, magnified by the low Flanders Expo roof.

Several times during his opening service game he had to abort his service motion due to outbursts from the crowd but he kept his nerves at bay to hold.

Goffin had been stricken by them against Kyle Edmund on Friday before recovering just in time to pull back a two-set deficit.

This was different because of the class of his opponent but, with Belgium’s hopes resting on his shoulders, there was pressure nonetheless.

Goffin had lost both his previous matches against Murray without taking a set, and in Paris earlier this month he had won just a single game.

The key moments of the first set came when Murray defied more noise from the crowd to save a break point in the fifth game and then showed why he is a class above all the other players in this tie by stringing four exceptional points together to break to love.

Even when Goffin was in control of the rally, he was still in danger, as Murray showed in the seventh game with an incredible scrambled forehand winner cross-court.

After getting so close, the suspicion was Goffin would have needed a more fearsome weapon than a tennis racquet to stop Murray leaving the court victorious.

The Belgian saved three set points but on the fourth Murray placed a forehand into the empty court.

The size of Goffin’s task was illustrated by the fact Murray had not lost a match all season after winning the first set, while the Belgian could only boost one victory over a top-10 player in his career.

Having seen his second break point disappear in the flash of a Murray serve, Goffin was under the cosh again in a long third game of the second set but came through it.

The 24-year-old was doing a fine job of resisting the pressure on his serve but he finally cracked in the 11th game, netting a forehand to leave Murray serving for a two-set lead.

He found himself down 0-30 but won four points in a row, ending the set with a stunning forehand winner. Goffin had thrown everything at the rally but another moment of Murray magic left him with an impossible looking task.

Goffin, whose comeback from two sets down against Edmund had been the first of his career, seemed to have some hope when he broke Murray at the start of the third set only for the Scot to hit straight back.

Murray’s only loss from two sets up came when he was 18, and he was not about to make this a second.

Goffin had given his all but, when he was broken again in the seventh game of the third, it was all but over.

When the Belgian stepped out to serve at 3-5, Murray knew it was his moment.

On his first match point, he netted a backhand, but on the second, in a microcosm of the match, he withstood everything that Goffin threw at him before leaving him a helpless spectator as a perfect lob dealt the final blow.

The celebrations were as wild as you would expect after history was made, with captain Smith highlighting star turn Murray for particular praise once they had subsided.

“It is amazing,” he said. “It is as good a feeling as I could possibly imagine.

“Andy has shown himself to be an absolute superstar again.

“He will be the first to say it is a team thing, but what he has put himself through this year, in particular, has been astonishing.

“Yet again it was a brutal match, even thought it was straight sets — it was tough going and he rose to the occasion on the big points.

“I am so, so proud of him but I am proud of everybody.”

As for the man himself, Murray was elated to be able to add the Davis Cup to his Wimbledon, US Open and Olympic titles.

“It feels amazing,” he said. “I never thought we would have the opportunity to do this and I can’t believe we did it.

“We’ve had chances in almost every single match that we played and, yeah, I can’t believe we did it.”