America at Large: The battle against ignorance to banish Confederate flag 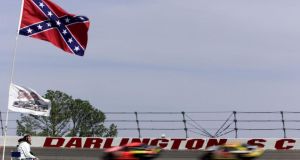 Beneath the old Confederate States flag, a fan watches the racers flash past the wall during the Nascar Winston Cup Carolina Dodge Dealers 400 at the Darlington Raceway, Darlington, South Carolina. Photograph: Donald Miralle/ALLSPORT

Steve Spurrier is one of the most respected figures in college gridiron. In the half a century since he was the best student quarterback in the country, his achievements on the sidelines at the Universities of Florida and South Carolina have earned him the simple, telling moniker of “the ole ball coach”.

Eight years ago, at an awards ceremony where he was being recognised for his philanthropy, he ventured an opinion about a hot-button issue in the American South.

As soon as those quotes reached the wider world, the death threats started coming. Suddenly, the esteem in which Spurrier is held across Dixie, the exalted status he holds, offered no protection. In the rabid minds of those who cling to the emblem General Robert E Lee’s troops carried into battle in the American Civil War, that type of treasonous talk remains a capital offence.

Against that tawdry background, it was inevitable sport would become embroiled in the renewed debate about the future of the Southern Cross. Once photographs emerged of Dylann Roof, perpetrator of last month’s Charleston church massacre, wrapping himself in the flag like some perverse white supremacist comfort blanket, the clamour began for it to be retired from public life.

Nikki Haley, Republican governor of South Carolina, asked that it be taken down from atop the state’s capitol building in Columbia. Wal-Mart and other retailers removed replicas from stores. Then came Bill France, chairman of Nascar, the sport that, more than any other, originates in, belongs to, and embodies the Deep South.

“If there’s more we can do to disassociate ourselves with that flag at our events than we’ve already done, then we want to do it,” said France. “We are going to be as aggressive as we can to disassociate ourselves with that flag. Obviously, we have our roots in the South . . . it’s part of our history, like it is for the country, But it needs to be just that, part of our history. It isn’t part of our future. We want everybody in this country to be a Nascar fan, and you can’t do that by being insensitive in any one area.”

Perhaps befitting a sport that grew out of bootleggers using driving skills and souped-up cars to run moonshine past federal authorities from Virginia to Georgia, Confederate flags have always billowed across Nascar in-fields. However, in recent years, even though merchandisers have continued to flog flag-related paraphernalia at race sites, NASCAR has been trying to distance itself from an historical artefact that has become increasingly radioactive.

In 2012, Bubba Watson fetched up at the Phoenix Open in the General Lee, the burnt orange Dodge Charger made famous on The Dukes of Hazzard, replete with Confederate flag painted onto the roof. Nobody in golf appeared to bat an eyelid and fans lined up to take pictures next to it. Yet, a few weeks later, Nascar refused to allow Watson drive his piece of pop cultural history (for which he’d paid $110,000 at auction) around the Phoenix International Raceway in a parade lap. A decision that left the Floridian a little perplexed.

“The show was not racist,” said Watson. “But I understand why people would get upset with the flag. Obviously, I don’t stand for the Confederate flag. The Confederate flag was not used in the show for what people see it as today, so that’s sad.”

What Watson and others fail to grasp is, regardless of how much they associate the car with the misadventures of the Duke brothers and Boss Hogg, those 13 stars represent something very different.

Regardless of the context in which they are unfurled, they cannot be divorced from their toxic history. For those whose ancestors suffered under it, the potency of the memories the flag dredges up hasn’t been leavened any by the passage of time.

Brad Daugherty, the only African-American owner in Nascar, bristles every time he sees it waving back at him at a track. College coaches in places like South Carolina and Mississippi talk about the terrible effect seeing it prominently displayed has on black high school players when they visit campuses.

To too many people, it continues to evoke the eras of slavery, Klan rallies and segregation more than some presumed attempt by southerners to pay homage to long-dead relatives who (thankfully) lost a war.

“How does this symbol which produces such a strong feeling of offence by those who were oppressed under it, best represent that pride and heritage?” asked Seattle Seahawks’ wide receiver Doug Baldwin, an African-American from Florida. “If you can answer and defend this flag in a way that isn’t rooted in a sense of emotional, stubborn pride for the oppressive intent this flag has represented in the past, then I’ll gladly commend you for it. But until then, I’ll be patiently waiting for the day ignorance can educate itself and will do my part to try to educate it in an assertive, respectful manner.”

The day ignorance can educate itself, the day the last of the flags will come down.