India level series with Australia after eight-wicket win in Melbourne 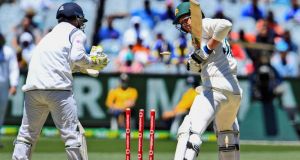 Australia’s Josh Hazlewood is bowled without playing a shot by India’s Ravichandran Ashwin as wicketkeeper Rishabh Pant looks on on the fourth day of the second Test match at the MCG. Photograph: William West/AFP via Getty Images

India completed a remarkable recovery to cruise past Australia in the second Test and level their four-match series at 1-1.

Routed for their lowest Test score of 36 in an eight-wicket loss inside three days in Adelaide before Christmas, the tourists bounced back to win by the same margin midway through day four in Melbourne.

The victory – which sets up a tantalising second half of the series between the top-ranked hosts and the third-ranked visitors – also came despite the absence of India’s talismanic captain Virat Kohli, who is missing the last three Tests due to the birth of his first child.

Australia’s batting line-up has come in for heavy criticism throughout the series, having failed to pass 200 through their four innings. Batting icon Steve Smith has struggled with scores of 1, 1 not out, 0 and 8.

Having won the toss as raging favourites, Australia were dismissed for 195 before India replied with 326, led by stand-in captain Ajinkya Rahane’s inspirational 112.

A second innings collapse left Australia flirting with an innings defeat before a rescue mission led by Cameron Green’s 45 took them from 99 for six to 200 all out.

That left India needing only 70 to win, which they collected in just 15.5 overs for the loss of two wickets with man-of-the-match Rahane fittingly hitting the winning runs.

Speedster Jasprit Bumrah led the bowling for India with four for 56 and two for 54, while off-spinner Ravichandran Ashwin and paceman Mohammed Siraj each took five for the match.

Australia were later fined 40 per cent of their match fee and penalised four ICC World Test Championship points for maintaining a slow over-rate.

The hosts were ruled to be two overs short of the target after time allowances were taken into consideration.

Meanwhile, Australia have announced the third Test will be staged at the Sydney Cricket Ground as planned.

An outbreak of coronavirus cases on the northern beaches of the city had led to speculation that the teams might remain in Melbourne.

Complicating matters further is Queensland – where the teams are scheduled to play the fourth and final Test in Brisbane –has closed its state borders.

But Cricket Australia says the decision has been made to keep the New Year’s Test at its traditional Sydney venue following several days of meetings.

“Despite the many challenges presented by the Covid-19 pandemic, I am delighted to say Cricket Australia remains on track to deliver the men’s international series as scheduled,” said Nick Hockley, Cricket Australia’s interim CEO.

“We have met regularly over the past week to assess the unfolding public health situation in Sydney and gauge its impact on border restrictions around the country.

“To date, we have been able to deliver a safe and successful summer thanks to our detailed biosecurity protocols and the amazing work of so many great people behind the scenes.

“In response to the public health situation in New South Wales and the requirements of the Queensland Government, CA will put in place appropriate biosecurity measures.

“To that end, we have made the decision to keep the New Year’s Test at the SCG.

“We are confident that both this match, and the fourth Test in Brisbane, will play out in a safe and successful manner and thus round out what has been a magnificent men’s international programme this summer.”