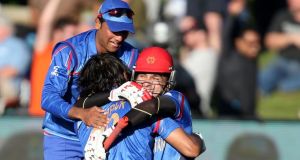 For a large part of Afghanistan’s successful run chase against Scotland on Thursday, Samiullah Shenwari hardly looked like the man to see them to victory.

Nonetheless he emerged the hero as his team claimed their maiden World Cup victory with a one-wicket triumph after an enthralling finale in Dunedin. The World Cup debutants appeared to be heading for a heavy defeat after a middle-order collapse left them on 97 for seven in pursuit of Scotland’s 210 all out — their highest ever total in cricket’s premier global competition.

The 28-year-old right hander, a former leg-spinner whose batting has propelled him up the order, was scratching around, blocking deliveries, playing and missing and unable to get the ball off the square or into gaps.

His strike rate was positively pedestrian, taking 50 balls to reach 20 runs, 12 of which came from three boundaries.

Scotland’s Richie Berrington and Josh Davey then turned the match with five wickets in six overs to reduce Afghanistan to 97 for seven, leaving Shenwari as the last recognised batsman and with his side still 114 runs away from victory.

Shenwari, whose previous highest score was 82 not out, then flicked the switch and became more aggressive while he farmed the majority of the strike as he combined in 35 and 60 run partnerships with Dawlat Zadran and Hamid Hassan.

“I did my job, and my job was just staying on the wicket till the end,” he told reporters in Dunedin. “My role was to be in there till the 50th over, and just take the last five overs to be for the hitting.”

The plan did not quite work as intended, with Shenwari falling in the 47th over attempting to hit a fourth six off Majid Haq, only to be caught at deep mid-wicket for 96.

He was dismissed with 19 required from as many balls but the last pairing of Shapoor Zadran and Hassan managed to carry Afghanistan to the 211-run target with one wicket and three deliveries to spare.

Shenwari said the dressing room had erupted at the victory but coach Andy Moles was quick to dampen their enthusiasm, reminding them they had the opportunity to beat Sri Lanka five days ago but lost it at the end.

“The coach came and said it’s just one match, and still we have a World Cup (to play). Two more matches to win to get there to that (knockout) stage,” he said.

“We’re looking forward to beating a test nation. We have a dream, and we missed it (against) Sri Lanka.

“We’re looking forward to the next match with Australia, and hopefully, hopefully we’ll give them a tough time and we will not give up easy.”