Novak Djokovic the man to beat yet again at Australian Open 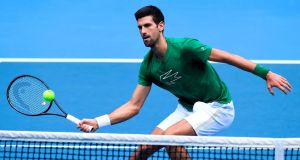 Novak Djokovic hits a return during a practice session ahead of the Australia Open. Photograph: William West/AFP

Gary Lineker’s celebrated quote that soccer is a simple game that “the Germans always win” might well be adapted to tennis and the inescapable dominance of Novak Djokovic at the Australian Open, which gets under way early on Monday in Melbourne.

For a tournament that has been thrown into some doubt by bushfire smoke in the lead-up, a record-extending eighth Grand Slam title for the defending champion Serbian would hardly be a breath of fresh air for many fans at Melbourne Park.

Some might prefer the romance of a Roger Federer triumph in the twilight of his career or for one of the younger generation finally to break through and end the stranglehold of the “Big Three”, who have divided the last 12 Grand Slam titles between them.

Djokovic is unlikely to care a jot for those sentiments, and if the bookmakers are to be believed, is set to crush them ruthlessly.

The 32-year-old may never feel the affections of the crowd savoured by Federer and Spaniard Rafa Nadal but his record of 16 Grand Slam titles is proof that tennis is no popularity contest.

That was never more clear than in last year’s final when he routed Nadal 6-3 6-2 6-3 with a devastating display that left the Mallorcan and the Rod Laver Arena terraces stunned.

For Djokovic, Melbourne Park is more than just a tennis centre parked on the banks of a murky river.

Over the years, it has become something of a temple for the Serb who has spoken of feeling touched by the “divine” when in full flight on the blue hardcourts.

Across the river are Melbourne’s Botanical Gardens, where Djokovic climbs a favourite fig tree and communes with nature in peace.

Djokovic has generally kept his build-ups quiet before easing into his work at the Australian Open but he has been front and centre in the new season, leading Serbia to victory over Spain in the inaugural ATP Cup final on Sunday.

His inspired 6-2 7-6(4) win over world number one Nadal was a snapshot of the pair’s recent rivalry as he coolly produced all the answers when tested by the all-action Spaniard.

If the tournament progresses according to seedings, the pair will again face off in the final.

Nadal, the reigning French and US Open champion, would have his work cut out plotting the downfall of a rival he has not beaten on a hardcourt for nearly seven years.

The 33-year-old claimed his sole Australian Open trophy in 2009, back in the days when he wore pirate shorts and had long hair.

Yet arriving in rude physical health, he may have his best chance of a second.

That would see him match Federer’s record of 20 Grand Slam titles and fire up the debate about who is “greatest” of all time.

Yet even at 38, six-times champion Federer may have a say on that.

The world number three Swiss has not lost to Nadal on a hard court since the semi-finals of the 2014 Australian Open and would surprise few if he extended the streak in Melbourne.

Federer may find more challenging obstacles earlier in the draw from hungry, young talents unburdened by the psychological weight of years of “Big Three” beat-downs.

Among them, fiery Russian Daniil Medvedev will be keen to take the next step after pushing Nadal to the wall in the US Open final.

Stefanos Tsitsipas, who won the season-ending ATP Finals, will be another to watch at Melbourne Park where the city’s big Greek community will be right behind him.

The 21-year-old set the tournament alight with a run to last year’s semi-finals which included a brilliant fourth-round upset of his idol Federer.

1 Born to ride, born to win: Sam Bennett, the making of a green machine
2 Leinster look ready to step things up and burn off Saracens challenge
3 Will Connors now delivering on his massive potential
4 Keith Duggan: Surreal story of John Delaney needs to act as a wake-up call for FAI
5 Rory McIlroy battles to stay in the mix as Patrick Reed leads the US Open
Real news has value SUBSCRIBE
Here is your handy guide to sport on television this week