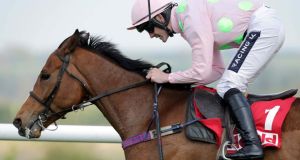 Champion Hurdle favourite Faugheen (above with Ruby Walsh onboard) is one of Mullins’s headline festival acts.

Just three weeks away from the start of Cheltenham, Willie Mullins believes he is set to bring his most powerful ever team to National Hunt racing’s greatest festival – with the champion trainer planning to take three shots at finally securing an elusive Gold Cup success.

Irish entries for Cheltenham’s lucrative series of handicaps are yet to be finalised but already Mullins is targeting a festival raid with a team of “40-plus” horses which will include the Champion Hurdle favourite Faugheen as well as other short-priced Day One favourites, Un De Sceaux, Annie Power and Douvan.

Twenty years after Mullins saddled the first of his 33 festival winners – Tourist Attraction in the Supreme Novices Hurdle – the strength of the Closutton team is such that one firm is already offering just 16/1 about the trainer saddling 10 or more winners despite the shape of the handicap races still to become clear. “We’re looking at bringing over 40-plus. I do think it has to be our strongest ever team. On paper-favourites at least it has to be,” Mullins conceded. “I don’t know whether they deserve to be favourites but, in those terms, it has to be our strongest team of horses at Cheltenham. We just have to get them there now.”

Faugheen and Hurricane Fly are Champion Hurdle headline acts but Irish racing’s dominant figure has made no secret of his ambition to finally win the blue riband event, the Gold Cup.

Runner-up with Sir Des Champs in 2013, Mullins also had to settle for second with On His Own last year. That horse will try to go one better next month and will be joined by another Graham Wylie-owned hope in Boston Bob, as well as Thyestes winner Djakadam who will carry the colours of Rich Ricci. “Everyone aspires to winning the Gold Cup. We’ve been runner-up four times in all so it would be wonderful to finally win,” he said. “The plan is for all three, Boston Bob, On His Own and Djakadam, to go for it.”

Michael O’Leary’s Gigginstown Stud could have up to 20 runners at the festival and last year’s Albert Bartlett winner Very Wood is likely to be among them – with the four-mile National Hunt Chase Noel Meade’s preferred option – after returning to form in the Ten Up Chase at Navan.

Pulled up on his two previous starts, Very Wood vindicated jockey Bryan Cooper’s decision to stick with him rather than switching to Gigginstown’s other hope, Thunder And Roses, by proving too strong for the free-running favourite Noble Emperor.

“I don’t know why he lost it like that but we gave him time and recently he started to look and feed better and he did a very good piece of work on the flat recently with Apache Stronghold and Texas Jack,” Meade said.

“He’s in the four-miler and the RSA and as a Cheltenham winner he has to go back. My initial reaction is for the four-miler,” he added.

Gigginstown’s colours had earlier been carried to another Grade Two win in the Boyne Hurdle aboard Dedigout while they also dominated the bumper with Nina Carberry pouncing late on Cogryhill to beat the favourite Arkwrisht.

Dedigout has a World Hurdle entry but his trainer Tony Martin warned: “He wouldn’t like ground better than this. There would have to be mention of ‘soft.’ But it’s great to see a good honest horse like him come back like this.”

There was no mistaking the sound of punctured Cheltenham ambitions surrounding Gilgamboa, however, after the 4/9 favourite got run over by the 25/1 outsider of the Flyingbolt Novice Chase field, Rawnaq.

Third to Un De Sceaux at Leopardstown last month, Gilgamboa’s jumping never convinced during the middle leg of the three Grade Two highlights and his trainer Enda Bolger admitted: “He didn’t look happy from a long way out.”

A veterinary examination afterwards, however, found that Gilgamboa had sustained a cut to his off-hind pastern.

Rawnaq completed a double for jockey Andrew Lynch and brought his own career tally at Navan to three from four, giving local trainer Matthew Smith his biggest success in the process.

“Running in this rather than three mile race on this ground was the right decision,” he said. “But on better ground three miles will be no bother.”