McGeeney to assist Grimley in Armagh 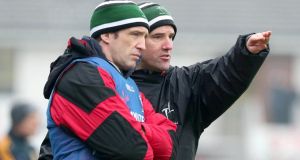 It’s not dubbed the managerial merry-go-round for nothing: Kieran McGeeney is leaving Kildare and returning to his native county Armagh. Photograph: Dan Sheridan/Inpho

So it’s not dubbed the managerial merry-go-round for nothing: on the same night Jason Ryan went before the Kildare county board to be ratified as their new senior football manager, to replace Kieran McGeeney, it was confirmed that McGeeney was returning to his native county to join up with Armagh football manager Paul Grimley.

It’s a simple enough complication made all the more interesting by its timing. The meeting of the Kildare County Board, originally scheduled for last Tuesday, was rescheduled for last night, and followed the controversial decision at the county board meeting early last month, where McGeeney failed, by a single vote, to gain the necessary approval for a seventh season in charge.

In the meantime there are still seven counties still looking to find a football manager for 2014 – and in some cases the search could continue for several more weeks.

Cork are still drawing up their list of preferred candidates to replace Conor Counihan. A six-man committee, consisting of county board chairman Bob Ryan, secretary Frank Murphy, vice chairman Ger Lane and club delegates Dermot O’Regan (Douglas), Paul McCarthy (Kinsale) and Frank Long (Bandon), have now begun that process but the actual appointment is unlikely to be ratified until later in the month.

In Mayo, James Horan last year got a two-year extension to his current term, which effectively keeps him in charge for 2014.

Some of the other counties without managers, particularly Sligo and Antrim, face even longer waits. The Sligo County Board have some pressing financial matters to get sorted before agreeing to their appointment, while Antrim only last week found themselves without a football manager for 2014 after Frank Dawson resigned, citing lack of support from the county board.

In hurling, just four counties are still searching for managers for 2014, and the most imminent appointment of those would appear to be in Offaly, with county board chairman Padraig Boland indicating they may be in a position to ratify their new man to replace Ollie Baker this evening.

The withdrawal of Michael Duignan has forced them to renew their search, although it’s still unclear whether or not that includes former All-Ireland winner Danny Owens, who just last Sunday guided Kilcormac-Killoughey to a second successive Offaly hurling title.

Galway manager Anthony Cunningham has indicated his desire to continue for a third season, but that will still require formal ratification at county board level. The next county committee meeting is due in three weeks’ time.

Limerick, Waterford and London, meanwhile, are also still hunting for their man.

There is no apparent shortage of candidates for the Limerick job after John Allen stepped down after just two seasons, despite guiding them to the Munster title. But early front-runner Liam Sheedy seems less likely now, while former Cork manager Donal O’Grady, who took charge of Limerick for a year before Allen came in, is also being sounded out.

Both Derek McGrath and Peter Queally have been nominated by Waterford clubs to succeed Michael Ryan, who was effectively removed by player power, although there is no definite date of when that position will be filled.

1 Gerry Thornley: Ireland don’t want to box themselves into a corner
2 Kevin McStay: Maybe a knockout All-Ireland Championship is the long-term solution?
3 Owen Doyle: Ireland suffered from officiating of the breakdown
4 The Offload: Ireland are stuck in no man’s land
5 New Killarney athletic track another jewel in the Kingdom’s crown
Real news has value SUBSCRIBE
Here is your handy guide to sport on television this week