Leading figures call for gambling advertising to be restricted 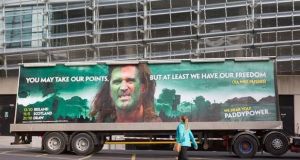 In 2015 Roy Keane took legal action against Paddy Power over a ‘Braveheart’ advertisement.

The amount of gambling advertising in sport is becoming problematic for fans, and in particular children, according to leading figures in the bookmaking industry and problem gambling services in Ireland.

These calls come as legislation around the industry continues to stall.

Adverts for in-play odds, free bets and promotions take up a huge part of the commercial space in sport – and in particular football – and it is leading to calls for, at the very least, a watershed ban to be implemented.

Paddy Power co-founder and former chief executive Stewart Kenny, CEO of Problem Gambling Ireland Barry Grant and Tony O’Reilly, gambling addiction counsellor and co-author of Tony10 – which charts his descent into problem gambling, rehabilitation and a prison sentence – have all told The Irish Times that gambling services should not be advertised during live sporting events.

In the UK the Labour Party has called for a watershed ban to be introduced for gambling advertising, in the same way that legislation in Australia recently banned all betting adverts during live sporting events between 5am and 8.30pm. In Italy a complete blanket ban on gambling products – due to come into place from January 1st 2019 – has been met with huge resistance.

Ireland currently has the third highest rate of online losses per capita around the world (only Australia and Singapore have more) but the gambling industry in this country is still self-regulating. Meanwhile, the legislation has remained the same since the implementation of the Betting Act of 1931 and the Gaming and Lotteries Act of 1956 – which states that the maximum stake that can be placed in an arcade is sixpence and the maximum payout is 10 shillings.

A new Gambling Control Bill has been delayed in the Dáil since 2013 with only some small developments made this year as the working group, headed by Minister of State for Equality, Immigration and Integration David Stanton, say they will present a proposal to government by the end of this year.

When asked by The Irish Times if a watershed ban would be a consideration in working group’s proposal to government, a spokesperson for Minister Stanton said: “The issue of advertising gambling services, and of related sponsorship and promotional activities will be addressed in the revised General Scheme of the Gambling Control Bill. “

O’Reilly, whose book tells the story of his journey from a €1 bet to a total spend of €10million, €1.75million of which was stolen from An Post and resulted in a prison sentence, believes that gambling is now such a part of the culture in Ireland that, in some ways, the horse has bolted.

“Gambling, a bit like alcohol in Ireland, is always going to be there because it’s ingrained in our society,” he says.

“I think what we can do is educate and that’s what I was trying to do with the book. I have no problem with bookies, I have no problem with Paddy Power. The one thing I would hope is that when people get to the point where they have fallen into a problem and they can’t take responsibility themselves that you’d hope the legislation would provide safeguards that these organisations have to do something to protect the players. Unfortunately in Ireland at the moment they are a bit behind.”

1 Liam Toland: Larmour can distract England while others flourish
2 ‘Manchester United are lucky to have you’: Klopp responds to Donegal schoolboy’s letter
3 This month a decade ago, football and Dublin changed course
4 Cian Healy’s hunger for battle undiminished by the years
5 Solskjaer complains about Molten balls after Brugge draw
Real news has value SUBSCRIBE