Ladbrokes propose ban on all gambling ads linked to sport 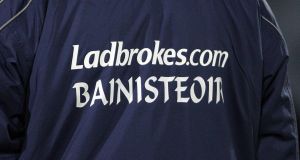 Ladbrokes has called on the gambling industry to end TV ads and jersey sponsorships for gambling companies. Photo: Donall Farmer/Inpho

The Ladbrokes’ owner, GVC, the UK’s largest gambling company, has broken ranks with the rest of the industry by announcing a series of proposals to protect problem gamblers, including an end to TV ads and football shirt sponsorship.

GVC’s boss Kenny Alexander called on the rest of the industry to follow suit as he announced a number of measures he said would “do more to protect the vulnerable”.

Among the most eye-catching proposals is a total ban on gambling ads attached to sports broadcasts, except for horse racing. The suggestion goes further than existing industry plans for a pre-watershed “whistle-to-whistle” ban during sports events.

GVC also said it would voluntarily end all sponsorship deals that promote its brands on football shirts or on pitchside advertising hoardings, matching a policy unveiled by Labour in 2017.

It said this would “allow fans to watch their favourite teams without seeing any incentives to bet” and called on football governing bodies and the gambling industry to do the same.

Alexander said: “While the vast majority of our customers enjoy our products responsibly, it is high time that the industry did more to protect its customers from potential harm.

“As the UK’s largest gambling company, and owner of Ladbrokes and Coral, we at GVC are doing exactly that. I call on our industry peers to help us bring about an end to broadcast advertising which promotes sports betting in the UK no matter the time of day.”

GVC, which is based in the Isle of Man, also pledged to channel one per cent of its gambling revenue into research, education and treatment projects by 2022, 10 times the current voluntary levy of 0.1 per cent.

To underscore its commitment to treating problem gamblers, GVC said it was establishing an independent trust to fund treatment of problem gambling and would also offer addicts GamBan software free of charge. GamBan allows customers to block betting sites from their phone or computer, rather than relying on the often ineffective industry-wide self-exclusion tool Gamstop.

Alexander said: “Increasing investment in research, education and treatment tenfold by 2022, funding treatment centres and using technology to intervene before a problem develops, alongside our existing behavioural analytics, brings to life our commitment to be the most trusted and enjoyable betting operator in the world.

“The industry should and can do more to protect the vulnerable, and today’s announcement demonstrates GVC’s commitment to delivering on that.”

Some of GVC’s smaller rivals are expected to question its motives for curbs on advertising, given that household name brands such as Ladbrokes are unlikely to suffer much compared to firms still trying to raise their profile. – Guardian

1 Connell losing touch with the club championship is the real tragedy of Normal People
2 Ghosts and goalposts: The soul of street football in Dublin’s Gloucester Diamond
3 Shane Ryan: Shark attacks and gruelling shifts on a Covid-free Atlantic mission
4 Coming fourth in the Olympics didn’t change this fearless quartet, time did
5 Sideline Cut: Vignette shows why Bird is the true shark in The Last Dance
Real news has value SUBSCRIBE