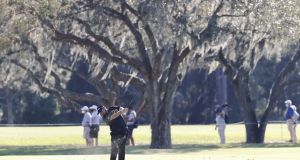 Shane Lowryhits from the fairway on the seventh hole during the first round of the World Golf Championships - Workday Championship at The Concession. Photo: Erik S Lesser/EPA

So, just the two Six Nations matches this weekend then after the announcement yesterday that France v Scotland is postponed due to the Covid-19 outbreak in the French squad. It’s led to a lot of questions as to how protocols are being handles by les Bleus and, as Gerry Thornley writes, it leaves Fabien Galthié in the eye of the storm. In the Ireland camp all is well on the Covid front but Andy Farrell may well find himself in the eye of a different storm over the weekend if Ireland fail to beat Italy in Rome. Farrell says that his side must be more clinical in taking their chances and he hopes that starts tomorrow. Two weeks ago against France, Iain Henderson led Ireland out for the first time and, while the lock has handed back the captain’s armband to Johnny Sexton for tomorrow’s match, his new contract at Ulster and high standing with Ireland means he will likely lead his country out again in the not-too-distant future. Meanwhile, away from the Six Nations, Johnny Watterson writes in his column this morning that he does not buy the apology around convicted paedophile and former Terenure College teacher and rugby coach John McClean. “In failing to protect children from McClean the Carmelite Order enabled him. In failing to address McClean quickly, they empowered him. In failing to remove him they emboldened him” he writes.

On to soccer and Manchester United completed the formalities against Real Sociedad last night with a 0-0 draw at Old Trafford which saw them advance to the last-16 of the Europa League after the 4-0 win in the previous leg. There was some history made as well when 17-year-old Shola Shoretire came off the bench to become United’s youngest ever player in Europe. Elsewhere, Leicester’s hopes were ended by Slavia Prague while, earlier in the evening, Arsenal struck late to see off Benfica. In domestic matters the FAI announced a boost for this season’s Airtricity League last night with the details of streaming services for the Premier Division, First Division and Women’s National League.

8 How supermarkets trick us into buying unhealthy food, and what we can do about it

9 ‘He’ll be missed’: Locals turn out to say goodbye to popular shopkeeper

10 It’s as if censorship were back: Why Ireland can’t watch Wild Mountain Thyme this month

11 Is owning a home a pipe-dream for the young?

14 Vaccine rollout to be ‘reset, not revamped’ after AstraZeneca decision – Reid

19 Covid-19: AstraZeneca vaccine should not be given to patients under 60, Niac advises as appointments cancelled

23 Evictions can recommence from April 23rd

24 Q&A: Where do we stand on AstraZeneca vaccine now it is restricted to over-60s?

25 Louis Theroux: ‘I worry about giving offence, being judged, not coming up to scratch’

29 Tenant promises to pay compensation after removing rafters from house

33 ‘Fame? If you have any personal demons, you’re quite not prepared for it’

36 Coronavirus: 358 new cases and 18 further deaths reported in the State

37 Customer experience in Ireland: The best and worst companies

38 Mary Coughlan revisits her past: ‘It was everywhere. Bags of cocaine, champagne and tequila’

39 Covid-19 Vaccine Tracker: What's available in the Republic of Ireland and what else is coming?