Hope and certainty collide in unlikely battle of green and golds

Until two years ago, Donegal had never even played Kerry in the All- Ireland championship. Now, they will meet them in both minor and senior finals 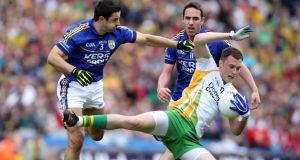 There has been a lot of talk for the past fortnight about the similarities between Donegal and Kerry - the landscape, the seascape, the Gaeltachts, the trad’ sessions, the abysmal sign posts, the tear-inducing cut of the January wind, the coastal towns they forgot to bomb, Monday Night Live with Packie Keeney and The South Wind Blows on the Dingle peninsula.

But when it comes to Gaelic football, the stark difference lies in the most commonly quoted fact. Kerry have won 36 All-Ireland titles. Donegal have won two. The history of the counties and a multitude of stories are contained within that bare record.

For decades, watching Kerry win All-Ireland titles was what school-kids all over Ireland did. It marked the end of September and the beginning of winter proper.

The gods of Kerry yesteryear, facing years of orthopaedic treatment from the sheer toil of hauling half a dozen of more Celtic Crosses in their rear pockets, have proclaimed this year’s progression to the All-Ireland final as an extraordinary feat because not that much was expected from the team. But deep down, all Kerry people expect to see their team to not just play in but to win All-Ireland titles in the coming decade.

That is not arrogance or complacency on their part: it is just the way things are. Donegal football people, in contrast, would not dare make that assumption, even privately. With Michael Murphy already shaping up as the footballer of his generation and Odhran MacNiallais on the cusp of what could be a serious inter-county career, they have reason to hope for more good years.

But deep down, there is a sense throughout Donegal that what Jim McGuinness and the Donegal players have being doing for the past four years is miraculous. Until two years ago, Donegal had never even experienced playing Kerry in the All-Ireland championship. Now, they will meet them in both the minor and senior finals.

It isn’t too long ago since that would have seemed like childish fantasy. A Kerry friend just this summer recalled being at the All-Star night in 2002, back when All-Star nights seemed like wild and lavish collaborative efforts between Baz Luhrmann and Brendan Shine.

The Kerry guest noticed the reaction of two Donegal players, who sort of stood to attention and nudged one another when several Kerry galacticos entered the banquet hall.

The Kerry man had been smitten by the play of both Donegal men that season and couldn’t believe how awestricken they were by his own county men. He said that he wanted to take them aside and shake them and ask them: What is wrong with you? Don’t you know you good you are? Don’t you realise if you were playing in Kerry, you’d be a fucking god? Don’t you know you’ve got game?” He did none of this, settling for buying them a pint (each). But the memory never left him.

And the answer to his question was: they didn’t. They didn’t understand or believe the depth of their potential then. Not when it came to existing in the same stratosphere as Kerry. That dawning had, in fact, occurred in another Ulster summer that year, namely Armagh, who had done what was considered impossible that summer in not just winning their first All-Ireland final but doing so against the Kingdom.

In fact, the most vivid image of that 2002 ceremony occurred in a small annexed discotheque away from the main dance hall, where most of the Armagh team took the floor to trash dance to SLF’s Alternative Ulster.

But within Donegal, the obligatory photograph of the 1992 All-Ireland champions framed in every single public house grew more faded and a succession of teams seemed destined to exist on the periphery of the top twelve teams in Ireland, now making an odd league push, now popping up in an Ulster final but never truly troubling the establishment.

That changed with startling and frightening rapidity under Jim McGuinness. In becoming obsessive in their pursuit of betterment and exploring the depths of their ambition and honesty and finding both cavernous, they were inevitably going to come up against Kerry and so after a century of nothing, the counties meet for the second time in three seasons.

September is, of course, Kerry time. They excel at this All-Ireland crack. If Paul Simon and Art Garfunkel ever truly want to know the sound of silence, they need only book into Benner’s the week before an All-Ireland.

Conversation is to Kerry what boozing and acting was to Richard Burton. It just flows. But in September, all Kerry folk become cautious and worried and read superstition into everything. That disturbance in the tree above Fitzgerald Stadium? The spy? It was just a pair of amorous crows.

Everyone knows it. Somewhere above, the great Páidí Ó Sé is grimacing right now. On the radio and in the papers, the ex-gods offer guarded hope that the Kingdom can edge it. It has been an odd season for their football team. Nobody tipped Kerry to win the Munster championship. (Although in the interests of full disclosure, this column did- and Tir Conaill to win Ulster (Irish Times championship supplement May15h).

Why Kerry were written off along with Colm Cooper’s injury was a mystery. Yes, they had lost a genius but not the entire team. Did anyone really think that players like Donncadh Walsh, Anthony Maher and Fionn Fitzgerald, let alone Eamon Fitzmaurice, would mentally dismiss the season?

You only had to watch the first half of their league visit to Mayo last February to see that the side was littered with good young ball players and the second half to see they could care less about the league. They have All-Ireland winners and the bit of necessary meanness: going to Parc Ui Chaoimh as no-hopers was perfect for them. Mayo, not for the first time, did Kerry football a huge favour by putting their players through the most rigorous test of young manhood since Richard Harris was a man called Horse. And they came through.

Kerry’s tradition brings an intense and constant internal pressure. How many Kerry footballers have finished up intensely disappointed at having only won two All-Irelands in their career?

It is very hard to stay remembered as a footballer in Kerry, even if you do win All-Irelands. You have to have netted a record haul, be absurdly tough or, like Maurice Fitz, be a genius.

In Donegal, the opposite was true for the 1992 team. The splendid isolation of that win conferred a sort of immortality on them all, whether they wanted it or not. The opposite is also true for the Donegal team that lines out tomorrow, regardless of how the final goes. For four years now, they have worn their very souls on their sleeves.

I think that is what makes this All-Ireland fascinating as much as the tactical machinations on the sideline or the respective patterns of play or the obscene numbers of ballads which the respective sets of supporters can call upon. It brings together a football tradition based upon absolute certainty and a football tradition based upon absolute hope.

My favourite Donegal-Kerry football story concerned a winter trip south for a league match and the late Cormac McGill, aka The Follower, who wrote a weekly column for the Donegal Democrat. The team was not going well and the Follower had written a cross column, causing an irate group of travelling Donegal supporters set upon the sports editor of the Democrat late one night in a Tralee hotel. Drink had been taken.

Nobody knew what McGill looked like and the sports editor sat there silently taking the heat as across the room, the Follower happily banged out a tune on the hotel piano. “I just thought: Nero played while Rome burned,” the sports editor said. The next day, Kerry won easily.

That was then. Tomorrow, both Donegal and Kerry will take the field with an iron-clad conviction that they are going to win. The city will tremble. Follower, thou shouldst be living at this hour . . .