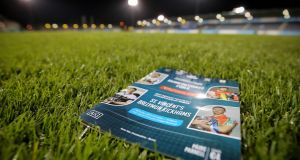 Some days were not epic and some were not, but hindsight adds its own meanings. Photograph: Inpho

On the shelf beside the desk in the spare room office, a year of match programmes ladders up in a pile. November ticks by and there won’t be many more to go on top. Come January, 90 per cent of them will go in the bin and we’ll start on a 2018 pile from scratch. Some of them are just scraps of paper really, reminders of where you put down your days and not a whole lot more.

Some pose questions. Who, for example, did I piss off so royally in early January that it was deemed important for The Irish Times to cover Meath v Wicklow in the O’Byrne Cup? The scrawl on the side of the page hints at a certain impatience with being there at all – ‘Fair play ref, not one second of injury-time.’

Others answer questions you would never have dreamed of asking. Kerry v Dublin in Tralee on the day after Paddy’s Day, for example, contains the gloriously useless nugget that Kerry and Dublin have played in five different venues in the history of the National Leagues – Croke Park, Parnell Park, Fitzgerald Stadium, Austin Stack Park and Listowel.

The Munster hurling final programme houses the even more arcane piece of trivia that despite there being so few counties in the Munster championship, “the only year that there was a previous version of the 2017 Munster draw, round by round, and involving Cork, Tipperary, Limerick, Clare and Waterford was 1888.” So now.

Without the programme from Round 4B of the football qualifiers in late July, who would have known that Kerry are the only county to have a 100 per cent record in the qualifiers? Or that Longford (won 17, lost 17) and Westmeath (won 13, lost 13) have exactly 50 per cent records? More to the point, who would want to know?

(Actually, everyone’s qualifier record is neatly laid out in that spread. Might make a paragraph in a piece about some county next summer. That one goes in the drawer.)

Instead, it consists of landmarks as varied as Brian Boru’s victory in the Battle of Clontarf in 1014, Scoil éanna in Rathfarnham being handed over to the state in 1970 and, somewhat racily, the director of the Mount Brandon Hotel in Tralee having to cancel an appearance by Jayne Mansfield on this day in 1967 after complaints from local clergy.

It is noted that Ms Mansfield died “in a car accident on Highway 90 on route from Biloxi, Mississippi to New Orelans” two months later on June 29th. Sadly, that fell on a Thursday in 2017 so it wasn’t mentioned in any of the match programmes from Round One of the hurling qualifiers.

Hindsight adds its own meanings too. On successive Saturday nights in June, we were in Portlaoise for Dublin v Carlow in Leinster football and in Wexford Park for Wexford v Kilkenny in Leinster hurling. Leinster chairman Jim Bolger wrote the opening page in both programmes, thanking all for coming, wishing everyone well, the usual jazz.

There was one subtle change week on week, though. In the Dublin v Carlow programme, he thanks referee Sean Hurson and his officials “for their commitment to the association” and signs off by writing: “I trust that their decisions will be respected by all.” Seven days and a world of Diarmuid Connolly chat later, Bolger similarly thanks referee Fergal Horgan in the programme for Wexford v Kilkenny but finishes with: “I hope their decisions will be accepted and respected by all.”

Some days were epic. We ran out of writing room in the middle pages of Cork v Tipp Munster first round programme, such was the weight and frequency of the scoring.

Some days were not epic. The centre-spread in the Monaghan v Cavan league match programme is more or less pristine – with a final score of 0-7 apiece, it is comfortably the worst game in the pile in either code.

The Leinster hurling final programme documents Joe Canning as scoring eight frees, a sideline cut and a 65 with no wides and no shots dropped short. Which means the man who would go on to be voted Hurler of the Year didn’t take a shot from play in the Leinster final. A mad stat.

The year rolls on and the programmes get glossier and weightier and pricier. For All-Ireland semi-finals, 64 pages. For finals, 98. The programme for the camogie finals carries a headshot of each player beside their name in the team line-outs, an idea so basic it stops you in your tracks with its genius. The woman’s football finals programme runs to 102 pages.

And then, as the year dwindles, so do the programmes. The one for last Sunday’s Leinster club hurling encounter between Cuala and Dicksboro was eight pages and not a penny more. The pen markings from the scores bleeds through to the back pages. A light breeze on the day would have blown it over the roof of the stand.

It goes on the pile, along with the rest of them, for another few weeks at least. A year pressing down on itself, all the good and bad of 2017 jammed inside.

Ireland suffer Twickenham torture yet again as England dominate 17:37
Westmeath reel Armagh back in to salvage a draw 17:33
Shane McGuigan 1-7 keeps Derry on the promotion trail 17:09
Tipperary have 20 points to spare as they claim first win of 2020 16:55
Kerry keep Royals at bay 16:52