Tyrrell Hatton picks up where he left off in Las Vegas 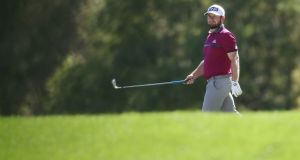 Tyrrell Hatton has the first round lead in Las Vegas. Photograph: Christian Petersen/Getty

England’s Tyrrell Hatton fired four birdies and an eagle in his first nine holes and finished with a seven-under-par 65 to take a one-stroke lead after the first round of the PGA Tour’s CJ Cup in Las Vegas on Thursday.

Starting on the back nine, Hatton seized the momentum early in his round at the Shadow Creek course when he holed out from the fairway for an eagle on the par-four 12th.

Hatton, who won the European Tour’s BMW PGA Championship in Surrey on Sunday and turned 29 on Wednesday, is a shot clear of Americans Russell Henley and Xander Schauffele as he guns for his second PGA Tour victory.

And he is already eight shots clear of Rory McIlroy, who struggled to an opening round of 73 which included a run of four-consecutive bogeys from the seventh to the 10th.

Shane Lowry is a shot better off, with birdies on 16 and 18 seeing him sign for a level par round of 72.

“Still struggling a little bit with jetlag. And you can tell by my voice, picked up a little bit of a sore throat if you like on the way over.

“Today was a long day. Very happy with my score and I just need to try and get back to the hotel this evening, have a good rest and hopefully sleep better than I did last night. Fingers crossed for another good day tomorrow.”

Dustin Johnson withdrew from the no-cut, 78-player event after a positive Covid-19 test but even without the world number one the tournament has a very strong field.

World number two Jon Rahm is tied for fourth after carding a five-under par 67, while defending champion and world number three Justin Thomas had an even par 72.

The CJ Cup was switched to Las Vegas from South Korea this year because of travel restrictions imposed due to the pandemic.