Tommy Fleetwood in positive mood despite lack of Bethpage knowledge

English player has never played course for US PGA Championship 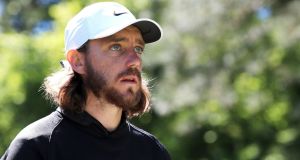 England’s Tommy Fleetwood: I generally say every course suits me and then see where we go from there. I try to make a positive statement about it and then work backwards from there

Tommy Fleetwood will take a positive approach into the US PGA Championship, despite admitting to being at a distinct disadvantage.

Fleetwood was just 11 years old when Tiger Woods won the 2002 US Open at Bethpage and turned professional in 2010, the year after Lucas Glover claimed his lone major title in the 2009 US Open at the same venue. The 28-year-old was also not in the field when Bethpage hosted the Barclays tournament in 2012 and 2016 as part of the FedEx Cup play-offs, while his preparation has been dominated by being tournament host for the British Masters, where he finished a highly creditable eighth.

“I’ve never been to Bethpage before,” said Fleetwood, who was among the players on a flight to New York, chartered by the European Tour, which left two hours after the final putt was holed at Hillside. “I’ve seen it played in the events on TV but I couldn’t describe one hole to you. But we’ll be there nice and early and I’ll have plenty of time to prep. I mean, everybody raves about the course, don’t they, so I’m looking forward to that.

“I generally say every course suits me and then see where we go from there. I try to make a positive statement about it and then work backwards from there. But in general the major set-ups are generally the toughest and I do like that about them. I enjoy playing that style of golf and I enjoy tournaments where you know you have to play well and it tests every aspect of your game. We’ll start off saying it’s suits me and then see.”

Fleetwood has missed the cut in two of his four appearances in the US PGA and has a best finish of 35th at Bellerive last year, but Bethpage will play more like a US Open venue and the Ryder Cup star’s record in that major is a different matter.

After a tie for 27th on his debut at Chambers Bay in 2015, Fleetwood finished fourth behind Brooks Koepka at Erin Hills in 2017 and second to the same player the following year at Shinnecock Hills. After admitting they went “too far” with their course set-up for round three, tournament officials applied “appropriate levels” of water to the greens on Saturday night and Sunday morning, as well as selecting some more favourable pin positions.

Fleetwood took full advantage with a stunning final round of 63, agonisingly missing from eight feet for birdie on the 18th to equal the all-time major record of 62 set by Branden Grace in last year’s Open Championship at Royal Birkdale. His score still matched the lowest in US Open history and set a testing clubhouse target that only Koepka was able to beat by a single shot.

“The shot you would look at is the putt at the last obviously, but I shot seven under and tied the lowest round in US Open history,” Fleetwood recalled. “It’s difficult to look at just one shot, but I beat everybody but one player in one of the biggest events in the world.

“I think I can compete in any company. I’d like to do it more. The majors and big events eventually bring the best players to the top, so if I play well or not I always find playing the big events very motivating because it shows you where the game is at.”