Time for heroes in Paris as Ryder Cup talking ends

The fun is over and it’s time for the golf to start but which team will emerge victorious? 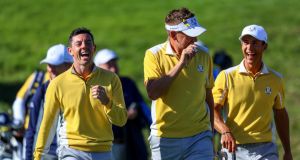 Europe’s Rory McIlroy, Ian Poulter and Thorbjørn Olesen during Thursday’s practice round ahead of the 2018 Ryder Cup. Photo: Oisin Keniry/Inpho

Let forth the storm with a ferocious might; for, after the calm and political correctness of the preambles, this Ryder Cup is ready to combust. If we’re honest, the niceties of the buildup days have drained everyone, with players itching to finally get going in this 42nd edition of the match and to let their clubs do the real talking.

Rory McIlroy can only hope that his putter will catch fire. A microcosm of his woes were to be seen on the 16th green in his final practice on Thursday, where his tee-shot finished 12 feet from the flag. The applause was loud, even encouraged by the player as he walked to the green with his putter raised above his head. But McIlroy’s first putt missed left. Back he went, only to leave his second effort short of the tin cup. A third putt moved right at the death. At the fourth time of asking, he sank the putt. Only, from now on, there will be no such second, third or fourth chances. No safety net.

And McIlroy – playing in his fifth Ryder Cup before reaching the age of 30 – has been entrusted with leadership duties. If it seemed a move from left-field in hooking him up with Thorbjorn Olesen, it was one which actually came into captain Thomas Bjorn’s mind after talking with the players. Olesen wanted to play with McIlroy. McIlroy wanted to play with Olesen. Sometimes, there is no rocket science behind such moves.

“If you asked the guys in our team, ‘Who do you want to play with?, Rory is not far away, is he, from most of their lips . . . . they are both really keen on it, and once they were keen I started looking at it and it turned out, the way they had been playing and how they are feeling on the golf course, (matched up). And as a pairing, that’s a great start,” said Bjorn of his reasoning which sees the McIlroy/Olesen pairing face up to world number one Dustin Johnson and Rickie Fowler.

McIlroy and Olesen have actually known each other for a long time, not just through their Nike contracts. “We first played together in Egypt back in 2010, which is a long time. But our game styles are pretty similar. It’s about chemistry and, as being one of the more experienced players, I wanted to not necessarily take a rookie under my wing, but if it was called upon me to play with someone a little less experienced, I was all for that,” said McIlroy.

Bjorn, though, also revealed a gambler’s instinct in benching experienced hands and letting loose so many of his rookies. No Henrik Stenson (and the elbow injury is not an issue, apparently!). No Sergio Garcia. No Ian Poulter. As those old-timers watch on, Bjorn has wasted no time at all in blooding four of his rookies with Olesen, Jon Rahm, Tyrrell Hatton and Tommy Fleetwood all thrown into the cauldron from the off.

“They are all difficult to leave out, especially guys that have played in so many. It’s the worst part of being a Ryder Cup captain, (making) the picks, and leaving guys out . . . . when you look at this group of guys that’s come into this team, they are really hard competitors and I believe in them so much. I wanted to give them that responsibility of standing up and (going) out there,” explained Bjorn.

Winning the first session of fourballs, or at least breaking even, is the target. For Europe to regain the trophy, an avoidance of what happened at Hazeltine last time – when the USA won all four of the first session matches to establish a lead that was never threatened – will be necessary.

Would surviving the opening fourballs on equal terms satisfy? “I think you have always got to look at any session and, if you’re not losing, it’s not too bad. I look at these matches, and they could be as tight as anything. All four of them. Golf is a funny game but this is what I trust and believe in,” responded Bjorn.

Jim Furyk, too, put his own stamp on his selected fourballs. All are brand new pairings, with no history. He broke up the successful partnership of Jordan Spieth with Patrick Reed and, instead, put Reed – the Captain America of the team – with Tiger Woods at the bottom of the order against Francesco Molinari and Tommy Fleetwood. “Any time you get to tee it up with the Big Cat, it’s fun,” said Reed.

If there was any surprise in how Bjorn set up his fourballs, Furyk didn’t show it. “I think Thomas did the exact same thing on his side that we did. You take the pieces of the puzzle and you put them together and you come up with the four best pairings that give you an opportunity,” he said.

For sure, there is a weight of pressure on the Americans. Not since the Belfry in 1993 have the invaders from across the Atlantic returned with the trophy. Not one of their team has ever savoured that winning feeling on foreign soil. In matches that have taken place in Spain, England, Ireland, Wales and Scotland since then, Europe has successfully sent them home empty-handed. Now, France?