In his book about winning the 1997 US Masters, Woods paints a bleak social picture 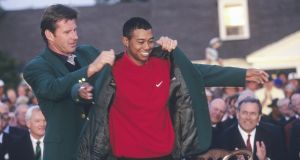 Nick Faldo puts the green jacket on Tiger Woods after the American’s record-breaking win at the 1997 US Masters. Photo: Getty Images 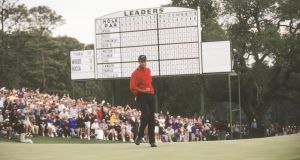 Woods holes a putt during the final round of the 1997 Masters. Photo: Sam Greenwood/PGA TOUR Archive 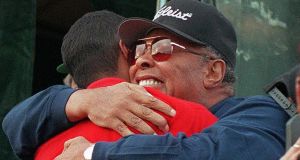 It is sad a reminder of Tiger Woods’s brilliance arrives at a point when his career has never been clouded in more doubt. With little over a fortnight to go until the Masters, the 41-year-old still cannot confirm his participation as he battles recurring back problems. Still, there was an upbeat Woods in Manhattan on Monday as he launched The 1997 Masters: My Story. Woods’s decline has not diminished the level of focus on his every move as exhibited by disappointment at the book store when fans were limited to one copy per person.

Twenty years ago Woods was not so much at the peak of his powers as offering a sign of things to come. He prevailed at Augusta by a dozen shots to claim his first major, thereby endorsing every theory that existed since childhood that he would prove a golfing phenomenon. This book is notable for being in existence at all, Woods being so guarded in his public dealings, and therefore provides superb and so rare detail of the thought processes of this golfing genius. When Tiger speaks people still sit up and take notice.

The mechanics of the 1997 Masters can wait. Woods uses this book to continually reference the struggles he had on the grounds of race. Golf, the industry which made him a superstar, was initially an uncomfortable environment. When donning a first of four Green Jackets, Woods had a goal. “I knew none of this meant, necessarily, things would change dramatically for minorities in golf. I hoped my win would encourage them to play, or to chase their dreams whatever they were.

“But it would have been naive of me to think my win would mean the end of ‘the look’ when a person from any minority walked into some golf clubs, especially the game’s private clubs. I only hoped my win, and how I won, might put a dent in the way people perceived black people.

“I hoped my win would open some doors for minorities. My biggest hope, though, was we could one day see one another as people and people alone. I wanted us to be colour blind. Twenty years later, that has yet to happen.”

Woods offers childhood context; the rocks thrown at his family home in southern California, how he could not buy a drink or change in the same locker rooms as friends in certain golf clubs. Maybe some of his incredible inner drive derived from discrimination. Woods has always been highly guarded about matters of politics or race. It is impossible to say whether time has enhanced his feelings regarding 1997; perhaps he has just waited for an opportune time to air such thoughts fully in his own words.

Augusta itself is so glaringly significant. For the club which had discriminated against black golfers to be the scene for Woods’s first major win had added meaning. Woods reveals being disappointed when he first entered Augusta National as an amateur in 1995. “Maybe I was underwhelmed because the club had excluded black golfers from playing for so long,” Woods says. “My dad said a couple of days later that Magnolia Lane didn’t impress a black golfer because of this history.”

That Woods’s father, Earl, was such a huge influence on his career is hardly revelatory. Woods uses this book to reveal the tactics Earl used to build on his fortitude; again with race as the undertone. Essentially his father verbally abused his son on the driving range with Woods able to use a code word if he felt the barrage had become too much. “I was a quitter if I used the code word. I don’t quit,” Woods recalls. “That’s how I saw myself. I was starting to get a sense of where I wanted to go in golf, but I also knew that, being half-black, I had better learn not to let insults penetrate. Insults are only words, and I couldn’t control what anyone said. But I could control how I reacted to what people said. I had to figure that out on my own, with my dad’s help. He helped in ways that people thought were hurtful. But I wanted to feel the hurt, so that I could overcome it with my golf. My dad taught me how to feel it but not let it affect my game.

“Did they think they could get to me? They couldn’t. I’d been hearing things in tournaments since I was seven or eight years old. People said things to me between green and tee, when they could get close to me. I saw but didn’t see. I heard but didn’t hear. Golf has no colour barrier when it comes to score, and who wins and who loses. There’s no judging. lowest score wins. I had total control over that.”

Those Earl comments, though, were extreme, at his son’s behest. “‘Fuck off, Tiger,’ he would sometimes say. I didn’t mind and even encouraged his cussing, which was poetry. He never repeated himself. He was very good at it and used everything he could possibly use. It was some good stuff, and eventually, I started laughing at it. It was ‘you little piece of shit,’ or, ‘how do you feel being a little nigger?’– things of that nature. that was OK. I was called those things growing up. I heard it at school and in tournaments, and I also knew the feeling of being excluded. My father’s approach was what I needed, and it worked for me. Maybe it would be called ‘tough love’ now.”

Any analysis of Woods is impossible without a nod to the scandal which engulfed his private life and led to divorce. He offers his latest public apology to his former wife, in context of “regret” that will “last a lifetime.” It was always – albeit marginally – in Woods’s defence that he had to endure personal struggles in view of the watching world.

He also offers an admission that will raise eyebrows with golf teachers, that he could never visualise shots before hitting them. Such a tactic is coached the world over.

There is also an amusing aside regarding Augusta’s Wednesday par-three contest and its evolution in recent years. “It was more of a gambling event when I first played it. Guys would play with their buddies, and usually for a pretty good amount. Some serious amount of cash was exchanged in the locker rooms.”

Woods is rueful at the alterations made to Augusta, the byproduct of how far golfers now hit the ball. After 2012’s modifications Woods claims Augusta was not as much “fun”. The 14-times major champion urges the R&A and USPGA to stunt golf ball development.

More reflection comes as Woods analyses his professionally reduced status. One of the most ferociously competitive individuals was in his element in April 1997. “Maybe I don’t live as much for that now, but I still crave competing. I also realise that, physically, I can’t necessarily do what I want to do and I know I’ll miss it when I’m done playing. Still, I love being on my own on the range, and going out in the evening to play a few holes – just me, the ball, and the course. ‘Compete’, though, remains my favourite word, and probably always will. My parents told me it was OK for me to fail, as long as I gave it everything I had. I have given it everything I have.”

Cynics will point out Woods’s slide renders outpourings such as this necessary. Yet everyone, including fellow golfers who could never get close to understanding the Woods psychology, will benefit from the insight.