Tiger’s tricks not enough as Snedeker triumphs at Matchplay 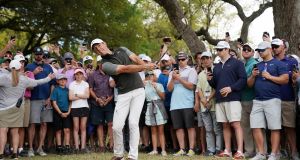 Rory McIlroy in action against Justin Harding of South Africa during the second round of the World Golf Championships-Dell Technologies Match Play at Austin Country Club in Austin, Texas. Photograph: Darren Carroll/Getty Images

Sometimes you don’t need to be a miracle worker to get the job done. As Tiger Woods improvised to play a wonder shot on the 10th hole of his match – getting down onto his knees to play left-handed out of a bush – it was his opponent, Brandt Snedeker, who stuck to his task to ultimately claim the prized win in the group phase of the WGC-Dell Technologies Matchplay at Austin Country Club.

“It’s not fair . . . typical him, that’s the kind of stuff he pulls,” said Snedeker of Woods’s miracle shot. Yet, it was to Snedeker’s credit that he remained unfazed by such audacious recovery shots to take a 2 and 1 win over Woods in Group 13. Only Aaron Wise – with two defeats – is out of the equation in qualifying for the knockout phase heading into the third round of matches with Snedeker (1½ pts), Patrick Cantlay (1½ pts) and Woods (1) still with mathematical chances.

With Woods, of the three, facing the biggest climb to qualify – needing to beat Cantlay and requiring a favour from Wise over Snedeker – there was a much steadier route towards qualifying taken by Rory McIlroy, who secured his second straight win in Group 4.

The 29-year-old Northern Irishman claimed a 3 and 2 win over the up-and-coming South African Justin Harding to take control of the group. All square through the turn, McIlroy managed to wrest control of the duel with an eagle three on the Par-5 12th and then won the 15th and 16th to close out the match.

“I played better. Justin put up a really good fight. He’s a good player . . . I just try to play the golf course and when you are called on to hit some key shots, that’s when you play the man,” explained McIlroy of his matchplay philosophy.

McIlroy moved to the top of Group 4 and only needs a halved match in his final round-robin encounter with Fitzpatrick to progress. The winner of McIlroy’s group plays the winner from that crowded Group 13 involving Snedeker, Cantlay and Woods.

While Woods clung on with his fingertips to the possibility of advancing, a number of players suffered early exits. Bubba Watson, the defending champion, and Phil Mickelson were among those to head into the third round matches with no hope of progressing. Mickelson found himself on the wrong end of a one hole defeat to Jim Furyk, who is also trying to force his way into the world’s top-50 cut-off to claim an invitation into next month’s US Masters.

Furyk – coming in on the back of a strong showing at The Players, where he was runner-up to McIlroy – entered the Matchplay ranked 54th in the world and has the opportunity to leapfrog into the top-50. Next up for Furyk will be Sweden’s Henrik Stenson, who continued his good form with a 4 and 3 win over Australian Jason Day.

Of the winner-takes-all clash with Furyk, Stenson observed: “It’s going to be a tough one. He’s a tough opponent in matchplay or in any play. He doesn’t give anything for free, that’s for sure. I’ve got to go out and play solid if I’m to advance.”

Shane Lowry – ranked 48th in the world heading into the Matchplay, and well aware that he needs to stay inside the top-50 for Monday’s Masters cut-off to qualify for Augusta – went to the 18th in his match with Patrick Reed, where a closing birdie earned the Offalyman a halved point. The highlight of Lowry’s round was an eagle two on the Par 4 13th, where he holed his approach shot.

Francesco Molinari made it two wins from win with a comfortable 4 and 3 win over Ryder Cup team-mate Thorbjorn Olesen. The Italian never trailed in the match and, having beaten Satoshi Kodaira in his first match, Molinari only needs a half against Webb Simpson to secure his place in the last 16. “I’m where you want to be after two days, in control of your own destiny,” said Molinari.

Jordan Spieth has shown an upturn in form, particularly well-timed in the run-up to a favoured hunting ground at the Masters. Spieth – down to 30th in the world rankings and a lowly 186th on the FedEx Cup rankings – was a 3 and 2 winner over Kevin Na to keep his hopes of advancing out of group 15 alive.

“I played really solid golf,” said Spieth, who goes into a head-to-head with Billy Horschel knowing a win will get him into the knockout stage. “I’m not looking for certainly anything results-wise. It’s more about trying to play better golf.”